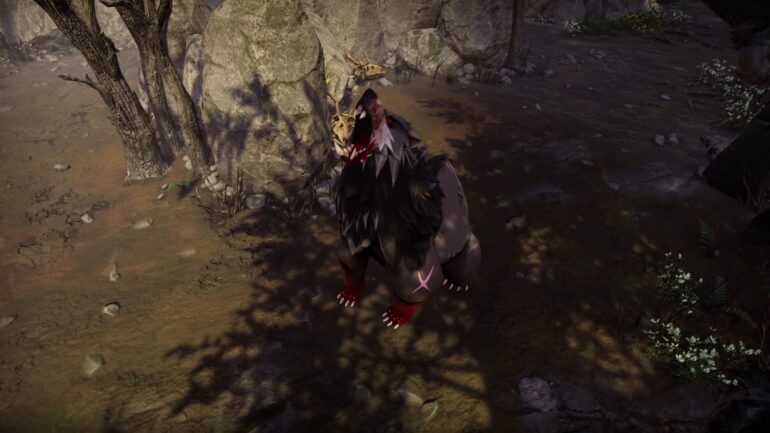 The V Rising Ferocious Bear Boss is one of the most challenging enemies players will encounter. Vampire folklore has always included animals, and these mythical creatures can be both controlled and used to shapeshift.

Ferocious Bear in particular, If you can find him, he’ll give you great items and abilities that will help you out in the game. Here’s a rundown on where to find the Ferocious Bear Boss and How to Beat it.

Where to Find Ferocious Bear Boss in V Rising

Utilize your Blood Altar to find the Ferocious Bear’s location. Here you may see every V Blood Carrier that has ever appeared in the game. Scroll down and find this boss, then click “Track Blood,” which will lead you to its lair.

Nevertheless, we recommend that you raise your Gear Level to at least level 36 or higher before fighting the Ferocious Bear Boss, If you’d like, you can invite friends along as well.

The V Rising Ferocious Bear Boss can be found in the area marked on the map below:

This Boss may be found in a large cave on the Far East side of the Farbane Woods. The road to the main entrance is located on the south side of the vicinity, so you’ll have to go around to get there. Sulfur, Stone, Animal Hides, and Hell’s Clarion can all be farmed in this location as well.

How to Beat Ferocious Bear Boss in V Rising

Since this is a Level 36 boss, you should have gear that matches that level or above. A Blood Rose Brew and an Enchanted Brew can be used to heal and boost your spell power, top it off with the Merciless Nightstalker armor along with copper weapons.

While it may be easier to kill the Ferocious Bear with ranged spells like Chaos Volley and Spectral Wolf, you can also take it down with Melee Attacks. Only a few significant strikes, such as a ground slam and debris falling from the ceiling, can be forewarned by red circles. You should therefore reserve any Veil abilities for quick withdrawals.

The Ferocious Bear attacks at close range as well, therefore you should utilize ranged attacks and attempt to avoid the monster as much as possible during this period.

Also, keep in mind that when the boss is enraged, he attacks faster and every hit deals damage that causes the Ensnare debuff to be applied to players. Try getting a movement speed or defense increase in order to avoid all of the attacks. It’s going to be a long fight, but it has to be fought in a safe and secure way.

In order to avoid getting attacked too many times, we recommend bringing a friend or understanding the boss’ attack patterns thoroughly. It’s more about diverting the attention of the Ferocious Bear boss from a single player when you play in a duos team setting.

If you decide to go at it alone, we recommend that you invest in the Blood Aegis and Chaos Dodge skills. The Bear Boss should be easy to defeat if you try these instructions.

Note: Every Boss Difficulty in V Rising Scales on the amount of players in the area.

Bear Form grants a 25% gain in resistance, 15% increase in speed, 15% increase in health regeneration, and decreases the damage players receive by 25%. You will be able to break previously indestructible objects while in this form as well.

Here’s a video by MrAtomicDuck on How To Find & Kill The Ferocious Bear in V Rising – Solo & Duo Tips: