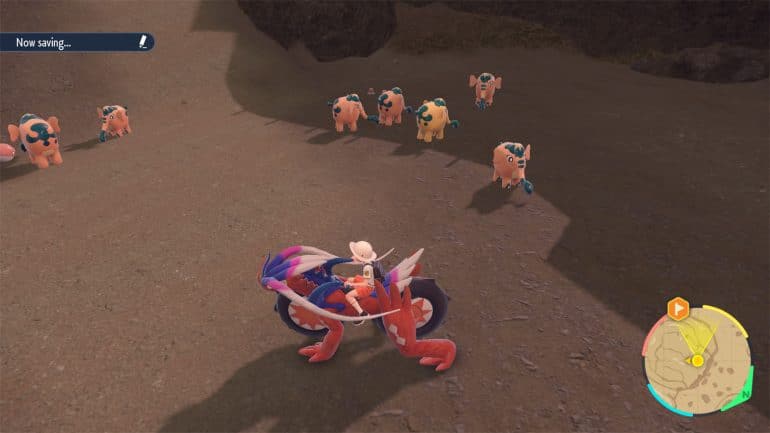 Shiny Hunting has been a huge side activity for shiny Pokémon enthusiasts ever since they started coming out in the Gen 2 Pokémon games. Despite having no upper advantage compared to regular Pokémon and the main difference is basically just with the color palette, many avid players still pursue shinies as they are considered as trophies for the dedication and patience of going through the great odds of finding them.

In this guide, we will talk about how to hunt for Shiny Pokémon, what are the new mechanics in play, and share some tips and tricks that will make the hunt much faster and easier to do.

What are Shiny Pokémon?

Shiny Pokémon are rare versions of Pokémon that can be found mostly in the wild and are sometimes given out through special events. Their stats are the same compared to their regular variants and their main difference is a color palette change that differs between species.

How to spot a Shiny Pokémon in Scarlet and Violet

Spotting a shinies in the wild in Scarlet and Violet is slightly more challenging than how it was back in Legends Arceus. Although their color variation is visible in the overworld, they do not have any extra visual guides such as sparkles, nor do they emit any special cries when in close proximity. This won’t be much of a problem when dealing with medium to large-sized Pokémon, but it can be totally hard to determine if a small Pokémon is shiny unless when zoomed in real closely. There are also shinies that don’t vary as much compared to their regular variants when it comes to color.

One trick that will help spot a shiny Pokémon is by using the Let’s Go feature as your Pokémon will refuse to attack any shinies.

How to hunt for Shiny Pokémon in Scarlet and Violet

Hunting for shiny Pokémon in Scarlet and Violet remains basically the same where most Pokémon that you encounter in the wild or hatched from eggs have the chance to spawn as a shiny variant. The major difference that affects the hunt in this game has something to do with the mass outbreak mechanics and the new meal power buffs which will be further discussed below.

We’ll start off by talking about the odds of spawning shinies for both finding them in the wild and through hatching eggs first.

Shiny Pokémon Probability in the Wild

The odds of rolling for shinies per spawn in the wild is still at 1 in 4,096. The main advantage of playing in an open-world setting as compared to the “tall grass” encounters is that multiple Pokémon can spawn in the nearby area at once, which makes it feel like it is much faster to find a shiny in recent games compared to previous ones.

These odds can be improved through various ways such as owning a Shiny Charm, raising the number of captured or defeated Pokémon in a mass outbreak, and having the Sparkling Power buff. All these methods increase shiny rates by adding an additional roll against the odds of spawning shinies and they can be stacked up to make the odds better.

Below are the odds of finding a shiny Pokémon for each applied bonus (Base rate is at 1 in 4,096):

The process of finding shiny Pokémon from breeding and hatching eggs have practically remained the same. The roll bonuses that apply to the shiny rate for hatching eggs come from the Shiny Charm and the Masuda method.

The Masuda method requires that both breeding parents should be from games of different languages. The offspring coming from this pairing will turn out to have a higher chance of being a shiny Pokémon. This could easily be done by trading with someone playing a game in a different language than yours through Link Trade.

In terms of rolls, the Masuda method adds 5 rolls on top of the base rate, as shown in examples below with and without the Shiny Charm:

Note: The shiny rate for Pokémon hatched from eggs is not affected by the Sparkling Power buff.

How to get the Shiny Charm

To get the Shiny Charm, you must first complete the Paldean Regional PokéDex (400 in total) which includes all the starters, version exclusives, and legendary Pokémon. After completing the Dex, you can then talk to Jacq at the Academy and he will reward you with the Shiny Charm.

How to get the Sparkling Power buff

The Sparkling Power buff is just one of the many Meal Powers that can be obtained from making sandwiches. Specific ingredients have to be added into the sandwich in order to get the Sparkling Power for a particular Pokémon type, and it usually requires high-tier ingredients like the Herba Mysticas that can be obtained from 5-star raids and up. An easy recipe guide has been compiled by user The_Time_Is_Nigh in this GBAtemp thread showing all the recipes that provide not only a level 3 Sparkling Power, but also a level 3 Encounter Power for each of the eighteen types.

Here are the recipes listed per type which are usually composed of one topping and two herbs:

How to do the Shiny Hunting Picnic Reroll Exploit

Players have discovered one exploit when it comes to rerolling or resetting the spawned Pokémon in a mass outbreak which involves setting up a picnic in a middle of an outbreak and then packing up right after. Whenever a picnic is set, all Pokémon within the nearby area will despawn and packing up will spawn a new set of wild Pokémon. Because of that, all the newly spawned Pokémon will have gone through the shiny roll without actually having to leave the area.

This is the quickest way to force shinies to spawn in the wild so far. It’s also best done once you have reached the 60 cleared threshold within an outbreak, plus with the added bonuses coming from the Shiny Charm and the Sparkling Power buff.

Although this is merely a way to “fast forward” through the spawns until a shiny Pokémon comes out without modifying any of the game’s data, many still consider this as an exploit that may or may not be patched by a future update.

Check out this video by aDrive showing how to find shiny Pokémon in Scarlet and Violet: