How to Breed Pokémon in Pokémon Scarlet and Violet 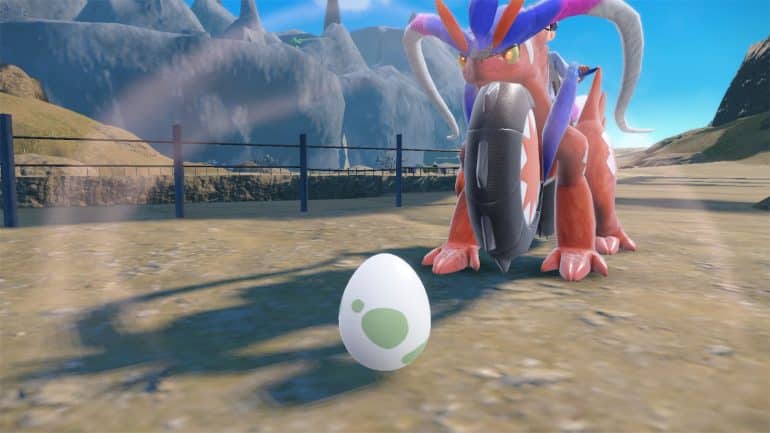 Breeding Pokémon has been one of the major gameplay mechanic that has been present ever since the first Pokémon game came out. With Pokémon Scarlet and Violet, breeding is done through a different process that is a bit more hands-on than in the previous games.

In this guide, we will talk about Pokémon breeding, what are the changes, and how to optimize it to get faster results.

How to Breed Pokémon

The biggest change in breeding Pokémon in Scarlet and Violet is that you no longer need to go to a Pokémon Daycare and leave two of your Pokémon there. You simply need to put up a picnic at a flat and level spot of land in the wild and the compatible Pokémon in your team will breed with each other. We’ll be talking more about the new stuff within this breeding mechanic as most of the advanced aspects of breeding from previous games still apply to it.

As usual, you will need to have at least two Pokémon in your team, male and female, or either one with a Ditto will do. Both species will also have to be in the same compatible egg groups. Keep in mind that whatever is the species of the female Pokémon will be the same species of what will hatch from the egg, unless the other half of the pair is a Ditto, then the species of male will be hatching from the egg.

You can also have your entire team of six be breeding with each other within the same picnic, provided that they’re all from compatible egg groups. The results from the eggs will depend on the number of females present, or if a Ditto is present in the team.

You can join up with your friend via the Union Circle and pave a picnic together, and whatever Pokémon is in your teams will be breeding with each other. The same pairing rules apply. This is helpful if one of your friends has a good or perfect IV Pokémon and they would rather hold on to the Pokémon than lend it to you via trade.

After a few moments of breeding (approximately 5 to 10 minutes, non-boosted), you can check with the picnic basket on the other side of the table to see if there are any eggs in it. The eggs that you get from it will be deposited straight to your Box even if you have an empty slot in your team.

Even though the process can be done “AFK”, be sure to check your basket from time to time as it can only hold a maximum of 10 eggs at once.

There are no new mechanics when it comes to hatching eggs. If you are familiar with the previous games, you’ll know that to hatch an egg, you will need to carry the egg/s in your team and do a couple hundred or thousand steps to hatch it. To speed up the process, you will also need to carry a Pokémon that has Flame Body, Magma Armor, or Steam Body ability to lower the step count by half; effects cannot be stacked.

More importantly, steps are counted even when you are riding Miraidon or Koraidon, so hatching an egg can even be done in under a minute.

Another mechanic that has been added along with the picnic is the ability to create sandwiches that can provide several kinds of boosts. One of these boosts called Egg Power will speed up the wait time of getting an egg from the picnic basket.

Some of the simplest sandwich recipes that you can do to get level 1 and 2 Egg Power are as follows:

These ingredients can be purchased from the various stores and delis in the cities and towns of Paldea, as well as from people from picnic sites in the wild as you meet them for the first time. Sandwich buffs last for 30 minutes and active buffs can be checked by pressing on the right D-pad.

As for Egg Power Lv.3, it will require Herba Mystica that can only be obtained from post-game Tera raids. One of the simplest recipes include Strawberry, Sweet Herba Mystica, and Salty Herba Mystica.

There are also meals that can be bought from restaurants in the city that provide the Egg Power buff, however this will require you to revisit the resto whenever you need to get the buff again as you cannot stock up on those meals.

The same shiny rate applies when it comes to hatching shiny Pokémon. Odds of getting a shiny are improved once you have the Shiny Charm, and it can still be drastically improved by performing the Masuda Method where one of the Pokémon being bred, preferably a Ditto, is originally from a game that has a different language. The shiny rates are listed below:

Take note that Sparkling Power does not affect the chances of getting a shiny Pokémon from an egg.

The same techniques and processes can still be applied when it comes to breeding for perfect IVs and retaining natures or abilities. Destiny Knot can still be held by one of the parents, presumably the one with the best stats, to increase the chances of passing on those stats to the offspring. Everstone can still be used to pass on the Nature to the offspring.

Check out this video by pricyzin showing a fast method of getting eggs from breeding: