An overview on the rumored DLC content tied to Miquella's Haligtree in Elden Ring. 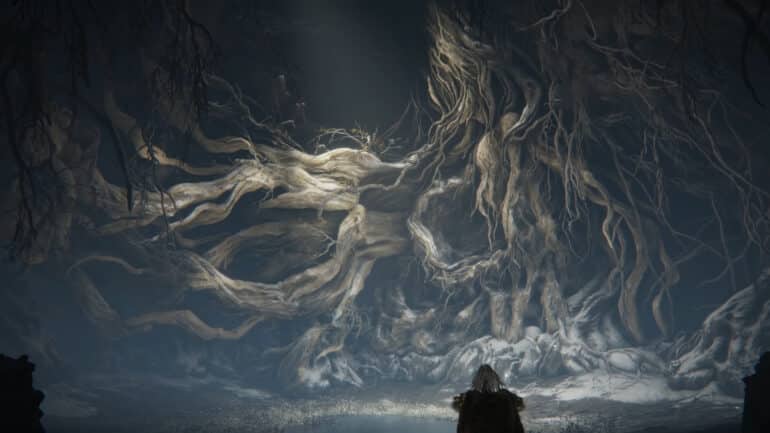 Most of the players that have played Elden Ring since its release have defeated the game a number of times at this point since the game has multiple endings that can be played through. On the other hand, those that want to experience a tougher challenge head on to Miquella’s Haligtree and further up to Elphael where enemies deal fatal blows to even the most hardened Tarnished.

But even after this, players are still looking for more. And because of how Miquella’s story seemed to end at a cliffhanger on what could have been a grander boss fight if different actions were done, players are speculating that its continuation might be the content of an upcoming DLC, if there really will be one in the future.

So far, there are a couple of clues that are pointing towards an upcoming DLC thanks to players who paid close attention to the lore, to data miners, and even to players who used cheat engine. Also, based on FromSoftware’s previous games, some of their DLCs’ content had been hinted within the games’ lore.

In Elden Ring, players felt that the entire Haligtree area and the story behind Miquella and Malenia served as some sort of an introduction of what could possibly be what players will see in a DLC.

A bit of a spoiler warning: during the final events of the Haligtree story, Mohg, Lord of Blood stole Miquella from the Haligtree to raise him to godhood and use him for his own plans. However, with the Tarnished defeating Mohg and foiling his plans, Miquella’s hastened growth was interrupted. A dialogue from Gideon confirms that Miquella is just slumbering and not dead.

Just recently, a newly discovered cut content showed that Elden Ring was meant to have a feature where players can collect dreams from slumbering enemies. Some theories are coming up that this cut dream capture feature might be the key on how players will interact with the sleeping Miquella.

Considering that everything in the Haligtree story is optional leads us to believe that there is a possible storyline where Mohg becomes successful in raising Miquella. However, another line from Gideon suggests that waking up Miquella might actually spell doom to everyone within the Lands Between, which could then be the entire plot of the DLC.

Another clue that stacks up to this is when data miners found an unused model of an adult Miquella in the game. According to the lore, Miquella has been cursed to remain as a child, which is why he looks younger than his twin Malenia. This would only suggest that Mohg could become successful in raising Miquella if the Tarnished decides not to interfere.

Continuing with his lore, despite being cursed to remain as a child, Miquella was known to many as the strongest Empyrean that ever lived. Therefore, if he does awaken from his slumber and becomes free from his curse, then it’s a perfect set-up for a grand boss fight.

Another thing that was found by the data miners is the weapon called Abundance Twinblade. Its description reads:

“Twinblade that contain the power of the Rune of Abundance. The holy power within the blade can all upon part of Miquella’s own strength.”

It has an Ash of War called Miquella’s Hidden Blade which deals damage from a conjured blade.

Connected to the first twinblade is the weapon called Abundance and Decay Twinblade which was also found by data miners. Its description closely ties to the twins themselves:

“Twinblade symbolizing twins Miquella and Malenia. Miquella and his sister were born from an inseparable fate. The blades contain the Runes of both Abundance and Decay.”

It has an Ash of War called Death Monarch which seems to work as a life-stealing skill.

It is possible that this might be an upgrade to the Abundance Twinblade by having it interact with the Hand of Malenia somehow, but so far, only its icon and description were found.

Within the current explorable map of the Lands Between is a vast sea or gulf that is surrounded by the different regions. Players are speculating that this might possibly be the area where the DLC’s events will take place.

On the drawn map, there is a cloud depicted in the middle of the gulf. Also, all of the divine towers in the game that surround the gulf are almost evenly spaced apart which suggests that they were intentionally constructed in those specific places. Finally, right smack in the center of all the towers is the cloud.

This might just be pure coincidence and the cloud was simply just a part of an artistic decision to break the emptiness of the gulf on the map, or a way to provide some hints that there might be something underneath that cloud all along. Speaking of which…

Thanks to the cheat engine, some players were able to explore what is in this region of the gulf. What they find was definitely not something meant to be seen in the game because in the water was just a giant square patch of nothing, kinda like what you see in a corrupted Minecraft map with some chunks missing from the world.

It’s understandable why a void would be in the middle of the gulf; it wasn’t meant to be seen after all. But perhaps someday, something might pop out of this void and become an important site for the DLC.

Praetor Rykard is speculated to have his come back as the DLCs main boss. During the fight in Mt. Gelmir, despite being defeated by the Tarnished, Rykard remains in a somewhat alive state, though unmoving. The aftermath of the fight shows his consort, Lady Tanith, eating away Rykard’s remains in the hope that he will live inside her.

Though it’s not much of a major story, but Patches’ story does tie to Lady Tanith. The story abruptly ends when Lady Tanith rejected the castanets that were once hers. Patches asked the Tarnished to give the castanets to her in the hopes of making her remember who she was before, suggesting that Patches knew Lady Tanith in his earlier days as a Tarnished.

Regardless if Patches’ story will have some effect to whatever the DLCs’ story will be, we’re also hoping to see some sort of a closure for it.

Fans of PvP are greatly expecting for the coliseums to open as it is believed to be the places where PvP match-ups could be done and more PvP game modes can be hosted. Right now, there are three coliseums that stand in the Lands Between: one in Lyndell, one in Limgrave, and one in Caelid. However, with no way of opening their doors, these appear to just be structures part of the landscape and not used for anything at the moment.

Considering that the older FromSoftware titles have PvP arenas in place, it’s not far-fetched to see these coliseum doors open up for players in the near future.

Those are all the rumors that we’ve read about so far about Elden Ring’s possible DLC.

Check out this video by RageGamingVideos talking about possible DLC content in Elden Ring: