Evil Dead: The Game allows you to play as the demons plaguing the human world. But who are these demons and what can they do? 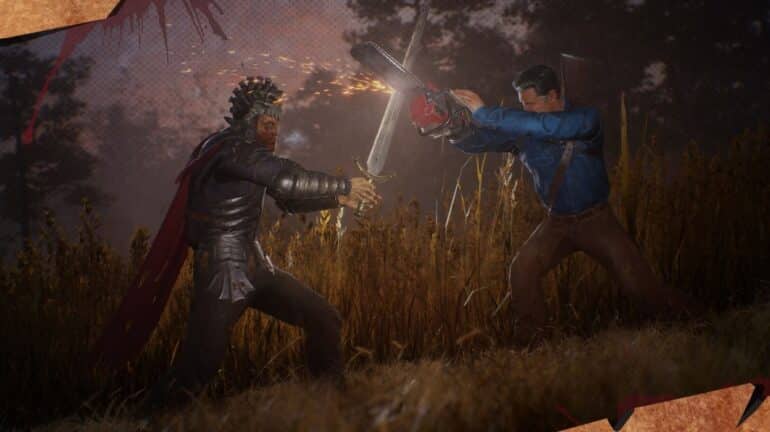 In Evil Dead: The Game demons are playable and you can take control of them to torment the hapless players who are fighting to survive the night. As the demonic villain, you have to do everything in your power to stop the human players from progressing. But to do that, you need to know what the demon you can do does and when to best use them.

Who are the Evil Dead: The Game Demons?

There are 8 playable demons in Evil Dead: The Game:

Each of the 8 playable demons can fall under different three categories. They are Warlords, Puppeteers, and Necromancers. Each demon has their own unique playstyle, skills, and abilities that make them fun to play. Being able to use them strategically is key to winning against the Survivors. Read our guide for Evil Dead The Game All Playable Survivors, Classes and Abilities to learn how to play as the heroes.

For each game, you play as three demons by selecting one of the categories. You aren’t stuck to controlling exclusively just one. So if you were to pick Warlords, for example, you will be playing Henrietta, Deadite Elites, and Deadites for the match.

Warlords are the most physical demons in Evil Dead: The Game. They’re essentially bruisers who can disrupt the players’ team composition. Led by Henrietta, bruisers excel in reeking havoc within a disgruntled team. Abilities used by Warlords are straightforward and thus are easy to use by newcomers who aren’t too experienced with the game.

As a Warlord, you jump into the fight head on. Your abilities to decimate players with sheer physical might is their greatest source of anguish. But in Evil Dead: the Game Warlords aren’t necessarily brainless and knowing when to use your powers is vital for victory.

Henrietta is the big bad of the Warlord category. As the chief-in-charge, Henrietta is very tough to take down as she has a large health pool. She can quickly wear down Survivors with strong attacks that deal a lot of damage. However Henrietta is slow and Survivors can run around her to avoid taking hits.

The Deadite Elites are a better version of the regular Deadites and have access to special skills. They’re not as tough as Henrietta, but can take and deal a lot of damage. Their weakness is that the Deadite Elites are slow and easy to avoid. Deadite Elites have a good chance to spawn in with an axe. When hit, their blood splatter can obscure Survivor vision.

Deadites are the mobs of the Warlord class. They’re fragile and don’t deal much damage but don’t underestimate them as they can really annoy Survivors. Their best use it to wither down Survivor defenses and overwhelm them before sending in stronger demons. Deadites have a good chance to spawn in with an axe.

The Puppeteers are the masterminds of Evil Dead: The Game. They can be a technical class to use as mastering the Puppeteers can require familiar knowledge of the game. Puppeteers can use their telekinetic capabilities to pester Survivors and turn the very environment against them.

As the Puppeteer, you need to plan ahead for what you’re going to do. You need to know an opportunity when you see one as some skills like the Thunderstruck require Survivors to stand still which they don’t often do. Puppeteers excel at taking down Survivors who often stick too close together due to their attacks which focus on area-of-effect damage.

Eligos is a master at using the environment against the Survivors and putting their progress to a definite stop. Eligos can become invisible while moving making him a challenging and tricky foe.

Demi Eligos has good abilities that hinder Survivors but has poor defense and damage. Demi Eligos require to be possessed to make use of their abilities effectively. Its biggest defensive advantage is that they can resist ranged damage but go down easy to melee attacks.

The Necromancers are tough foes that bury Survivors in overwhelming force by debuffing them while buffing their own undead. It’s hard to kill what’s already dead and a good Necromancer knows how to take advantage of the undead ability to keep coming back even after being put down. Their abilities rely on being persistent predators that make their presence hard to get rid of.

As the Necromancer, you’re focus should be in keeping your evil minions alive and constantly attacking. Both Evil Ash and his Skeleton Elite can revive any Skeleton with their abilities making them a challenge to put down. The Necromancer can require expertise on Evil Dead: The Game as it is a very technical class. If you’ve watched Army of Darkness, then you know what the Necromancer is capable of.

Evil Ash is the leader of the Necromancers. He hits hard and has a decent defense, but can be quite slow. Evil Ash’s ability to summon Skeletons to the fight is an integral strategy to winning.

The Skeleton Elite is equipped with a shield that blocks damage so long as they’re standing still or walking. They cannot use this shield when running or attacking and it gets destroyed when their balance bar reaches zero. Skeleton Elites are tanks that aren’t really meant to deal much damage but support their Skeleton troops while keeping itself alive.

The Skeleton is your main source of attack against the Survivors. They’re sturdy and can come back to life after being put down. While they’re abilities aren’t very impressive, Skeletons can overwhelm Survivors with sheer persistence.

Tips on Playing Evil Dead: The Game as Demons

Survivors are tough to take on when they’re grouped together. However you’ll occasionally get the fool who think he’s a lone wolf. Survivors without friends nearby and separated from their group are easy prey.

Characters like Cheryl Williams can be annoying with their ability to heal their friends. After some time, you’ll recognize who the support heroes are and work towards isolating them from the group.

Setting traps can be beneficial if you can plan it out ahead of time. While Evil Dead: The Game only has one map, Survivors have a set of random objectives. This will take a while to learn but once you become familiar with the map, you can spring a trap for poorly prepared Survivors as their on their way to complete an objective.

That’s our Evil Dead: The Game demons and their special abilities guide. We hope you learned how to control these demons better and wish you luck when taking on Survivor groups. If you really liked this guide, consider checking out more Evil Dead: The Game content we have.

Check out this Youtube video from Pixelz showcasing how to play as the Necromancer.