This article tells you how to obtain Null Taste because baking for your favorite NPCs is now possible in Destiny 2. 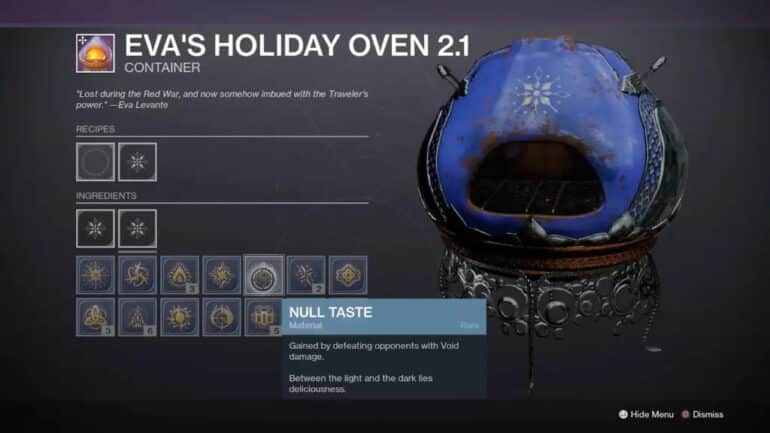 Null Taste is one of the components you’ll need in order to bake some cookies in order to get your hands on all of the new cosmetics in Destiny 2’s The Dawning event for 2021. But finding it can be a challenge, so you’ll need to put in some time in the game to farm.

The Dawning event in Destiny 2 has begun. Eva Levante’s return is a yearly occurrence, therefore it’s always a good idea to stock up on resources and missions as soon as possible.

The Dawning is all about collecting materials from the game’s major activities and locales to make presents and treats for some of Destiny 2’s most well-known NPCs.

Dawning Spirit can be earned by making and delivering cookies to the right NPCs. In order to get the most out of the event, you should start baking as soon as possible. We’ve provided all the information you need to get your hands on this rare drop during the event.

What is Null Taste in Destiny 2?

Null Taste is a kill ingredient, meaning it drops when you kill an enemy.

During the Dawning 2021 event in Destiny 2, players can bake a variety of recipes in Eva Levante’s Holiday Oven. Chocolate Ship Cookies and Dark Chocolate Motes both use Null Taste as a component.

Most components are obtained via completing actions in the game, such as killing enemies or collecting power orbs.

To get Null Taste during The Dawning 2021 event, you have to kill enemies using Void damage. Any ability or weapon that deals Void damage can drop Null Taste. This implies you can receive them on pretty much for every Void blow, however Supers will probably give you Superb Texture with Void last hits.

How to Get Null Taste in Destiny 2?

To obtain Null Taste in the Dawning event of Destiny 2, you will need to use Void weapons and skills to kill enemies. As long as you kill the adversary with a Void weapon or ability, you have a chance of getting the item. To get enough Null Taste components, you’ll have to kill a lot of enemies.

Null Taste can be obtained via two major ways:

Subclasses with Void Abilities in Destiny 2

In each class, there is a Void subclass with Void-based abilities that deal Void damage:

All Void Weapons in Destiny 2

Void damage can be dealt by Energy and Power Weapons.

Even though energy weapons inflict less damage to unshielded adversaries than kinetic weapons, they deal a lot more damage to elemental shields. When a Void weapon or ability destroys a Void shield, an explosion occurs, inflicting damage on nearby enemies.

It appears that Null Taste is a difficult component to obtain. Players have reported having difficulty finding any even when using Void weapons and abilities.

Use AoE weapons and abilities to effectively distribute the damage and get as many void kills as possible in order to boost your chances. While Void swords like The Other Half are excellent, Null Composure and Deathbringer should be your go-to weapons for both the Heavy and Energy slots.

In order to farm Null Taste fast, you should seek out areas with a high concentration of enemies that can easily be killed. The greatest area to farm monsters is in a place where you can get a lot of monsters in a short period of time. Things like Strikes and Dungeons are often solid investments.

Farming for Null Taste is an option if you’re desperate. In a short period of time, you can earn a substantial amount of Null Taste from these locations:

You’ll get a lot more kills per minute in these areas than you would in any other situation.

Null Taste farming can also be done on the Moon’s Altars of Sorrow by eliminating a small army of enemies in each wave. If you’re looking for Dark Chocolate Motes for Drifter, the Thrallway in Shattered Throne Dungeon or Shuro Chi checkpoint in Last Wish are both good options, as they both yield Taken Butter.

Otherwise, you may just go ahead and do what you normally would, just make sure you use Void weapons. You have at least two weeks to complete the holiday tasks, so no rush needed.

Lastly, playing Dares of Eternity is one of the easiest ways to obtain plenty of Null Taste in Destiny 2 during The Dawning 2021. This activity is included in the 30th Anniversary Pack and is one of the most densely occupied in Destiny 2 right now.

Getting Starhorse’s Favor is particularly important because it gives players unlimited Special and Heavy ammunition for all weapons. In this way, gamers can effortlessly equip their strongest Void weapons and slay every enemy they find.

If you are looking for Null Taste then you must be wanting to bake some cookies. Here are the NPCs and recipes that need Null Taste in Destiny 2 during The Dawning 2021:

Dark Chocolate Motes is another Holiday Gift item that can only be obtained during The Dawning event. Dark Chocolates Motes can be given to The Drifter in exchange for Rare gear.

Also check out this awesome video by Jarv on Every Destiny 2 Dawning 2021 Recipe: