A guide on how to plant and steal Omnium Beacons in Tower of Fantasy. 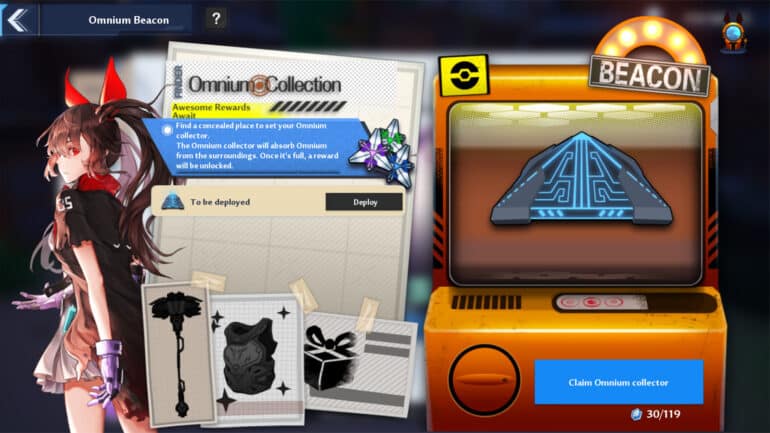 Omnium Beacons are an equipment in Tower of Fantasy that players can deploy out in the land to gather Omnium from the surroundings and synthesize materials out of them. They also serve as a minigame, not just for the players using them, but also for other players who can go look for these beacons and claim them for their own.

In this guide, we will be talking about the Omnium Beacons, how they work, and how to make them become a good source of materials.

Omnium Beacons can be claimed from the Adventure > Omnium Beacon menu for 30 Vitality each, with no daily limit. The rarity of the beacon is randomized upon obtaining them, which can range from Blue, Purple, and Orange, with Orange having the greatest chances of acquiring rarer materials.

Once you acquire a beacon, you can then use the beacon from the menu or use it from your Backpack, and place them on a flat surface on the world. So far, based on our testing, as long as the location is relatively flat (or to some slight degree of inclination) and is not in a restricted area (limited to suppressor level), a beacon can be planted on that spot.

Once planted, the beacons will also emit a short beacon of light that is only visible when approached closely. The color of the light will also represent the rarity of the planted beacon.

Regardless of the rarity of the beacon, all of them will complete their extraction after 24 hours. Only after the 24 hours have passed can the materials from the beacons be collected from the the Omnium Beacon menu, which will then be sent to your mailbox. Rewards can range among weapon batteries, matrix data packs, and weapon augmentation materials.

Once in a while, a signal will appear to be received in the Omnium Beacon menu. Using it will allow you to see the map with a marked general area of where the beacons of another player can be found, along with screenshots of their actual locations. You can then head to the area and use the screenshots to pinpoint where the beacons are.

You’ll then see their light which will give you an idea of the rarity of the beacon. Interact with it to claim the beacon for your own, and the rewards will be sent to your mailbox. Once a beacon has been interacted with, the signal for the other beacons will disappear from the menu.

On the other hand, if one of your beacons get stolen by other players, you will receive a notification about it along with the player’s name. You will also receive some partial rewards from the stolen beacon, with the amount depending of how long the beacon was able to do its extraction before it was stolen.

Here are some tips that could help increase your chances of getting successful Omnium extractions.

Check out this video by MetaTheFool showing a guide on how to steal other people’s Omnium Beacons: