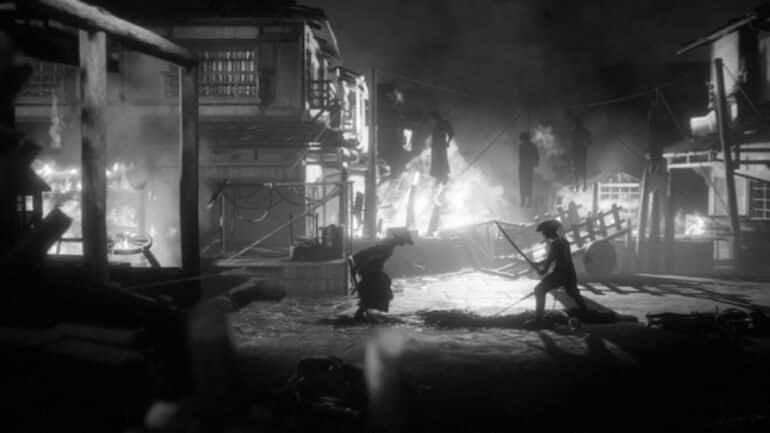 In Trek to Yomi, there are a variety of Artifacts that may be found throughout the game. These Artifacts give a deeper understanding of the Japanese culture and the environment of the game. Each of the game’s chapters contains about a dozen or fewer collectibles, so you’ll want to keep an eye out for them as you go through each chapter and kill enemies.

In this Guide, we’ll walk you through where you can find all the Artifacts in Trek to Yomi Chapter 4.

What are the Artifacts that can be collected in Chapter 4?

There are 10 Chapter 4 Artifacts in Trek to Yomi that you can collect by sequence:

As you make your way through the woods, the first artifact, the Onyudo, may be located at the junction with a bridge with a boat, walk over to the bench in front of the cage to collect it.

After the first Artifact, you’ll come across NPCs burning bodies into a bonfire. There’s a house right behind the pyre, which may be identified by a swinging lantern hanging outside the front entrance. Go inside the house, you’ll notice the Noppera-Bo sitting on the table in the front near the entrance.

After a while, you’ll come across a shrine. Take a right instead of a left at the giant arch. Just after the stairway, you’ll find the Otoroshi perched atop a crate.

There is a shrine and river in the next screen after beating a blighted enemy that is first introduced in a dialogue scene. Enter the house near the Dam, check the middle boxes on the first floor of the house to collect the Hitotsume-Kozo artifact.

When you’re back outside, there are two options for you to choose from once you climb a tiny cliff. Rather than going to the wooden pathway to the left, head up to the right. Push the tree down once you’ve gotten to the top, and you’ll see the Yurei on the left side of the ledge.

After surviving going through a section of a village, you’ll come across a shrine in front of a bridge, where you must defeat an enemy. Continue to the left until the screen changes, then proceed upwards until you come upon a dead body in front of a campfire on the right. You’ll find the Uwan artifact on the ground next to the corpse.

You’ll want to make your way through the house with lantern lighting the entryway. Once inside, descend to the floor below and exit through the right.  Continue to move forward until you see a bridge on your right. Instead of going to the bridge, take  the path to your left. The Nuppeppo artifact can be found close to a supporting pole, which is adjacent to the cage.

After defeating Morimitsu, you’ll come to a village nestled in a swampy environment. Cross the bridge in the village until you reach a walkway underneath a few houses. Once you’ve reached the shrine, move closer to the screen until the camera displays a ladder. Climb the ladder and proceed to the right, near the piled logs where you will find the Inugami artifact.

You will come upon a bridge near the end of the chapter, after you have crossed the large tower, that will collapse behind you as you go across it. Once you’ve made it over, head to the far right of the screen and scale the broken wooden walkway. You’ll find the Ushi-Oni artifact laying on a crate behind the NPC.

Follow the path that leads up through the small village, and then push the beam down to create a path. Continue to follow it around and down the hillside. You’ll find the Yamawaro artifact on a small crate beside a cage.

That concludes your search for Chapter 4 Artifacts in Trek to Yomi. If you like this guide, check out our other Trek to Yomi articles here:

Here’s a video by 360GameTV on Trek to Yomi – All Collectibles (Artifacts) and Health/Stamina Upgrades Chapter 4 Locations: