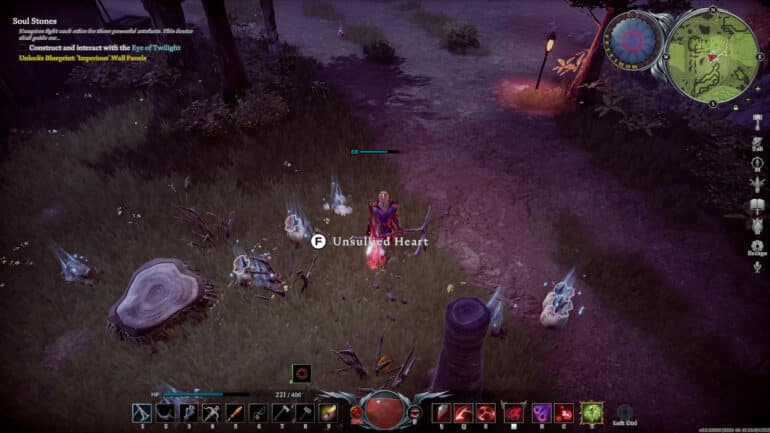 The V Rising Unsullied Heart is an item drop that is essential to craft a mid-tier essence, which in turn is needed for other recipes. It can be quite a rare item to find at first, but it will become an abundant resource once the right enemies and farming routes have been established.

Another use of the V Rising Unsullied Hearts is for consumption to get more blood. However, using it regularly this way is not recommended as it only gives 50% blood with a Frailed blood trait, making it only useful for emergency situations where blood is badly needed and there’s no other nearby source to get it from.

How to get V Rising Unsullied Hearts

There’s no particular location or monster to get Unsullied Hearts from as they are a rare drop from common monsters and enemies that are around level 30. These enemies are commonly found in the Dunley Farmlands, which is the best place for an Unsullied Hearts farming route with a mid-tier gear.

Though it is easier to slay minor enemies, the drop rate for V Rising Unsullied Hearts is quite low, especially if you are just starting to farm for them. The more efficient way of farming Unsullied Hearts as you are about to transition to mid-tier gear is by hunting down the first few easy bosses.

Even though they are situated in the Farbane Woods and are just around level 20, these bosses still have a chance to drop Unsullied Hearts at a higher rate than the mobs in the Dunley Farmlands. If you are geared well enough to deal with bosses such as Keely the Frost Archer, Rufus the Foreman, or Lidia the Chaos Archer within a reasonable time, then farming them is a great way to start.

Once you have upgraded your gear to be able to deal with the level 30 mobs quickly and without dying too often, then it’s time to transition to farming the Dunley Farmlands.

Start by going for the Militia Encampments and Farms that are dotted across the map. Then, raid the Mosswick Village or the Dawnbreak Village on either side of the map as they usually have a lot of patrolling guards and village folk to slay.

One of the densely populated locations is by the junction at the entrance towards the Haunted Iron Mine as there are camps in the location, plus patrols often pass by the area, so you can simply camp at the area and wait for the guards to come. Just be careful as this junction is also often patrolled by Vincent the Frostbringer and Christina the Sun Priestess which are two tough roaming bosses to fight against.

By the time that you have defeated Tristan the Vampire Hunter (Lv.46), you can simply stop farming for Unsullied Hearts since you would have already unlocked another Greater Blood Essence recipe which only requires Blood Essences to craft.

If you like this Guide, be sure to check out our other V Rising articles:

Check out this video by Kibbles – (Video Game DataBank) showing how to farm Unsullied Hearts: