A guide on how to defeat Godfrey, First Elden Lord in Elden Ring. 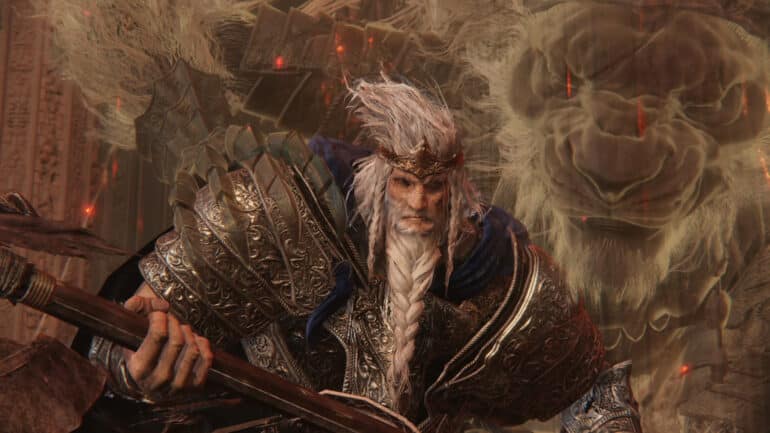 Godfrey, First Elden Lord in Elden Ring is a legend boss that players will have to defeat. Godfrey is just one of the two personas, the second one being Hoarah Loux, his true self who comes up in the second phase of the fight. A well-seasoned warrior, Godfrey can turn out to be a hurdle that’s hard to surpass.

In this guide, we will look into the the fight against Godfrey, First Elden Lord and share some tips and tricks on how to defeat him. This is a two-part guide, with the second part dedicated to the fight’s second phase.

Who is Godfrey, First Elden Lord?

Godfrey was once known as Hoarah Loux, a might chieftain of the badlands. When he got engaged to Queen Marika, he took the name Godfrey, First Elden Lord and has to carry Serosh on his back to inhibit his bloodlust and rage. After defeating several enemies and the Storm Lord, he was then exiled by Queen Marika from the Lands Between, making him the very first Tarnished.

You can find Elden Ring Godfrey, First Elden Lord’s arena in the same place where you fought Morgott, the Omen King, who was one of Godfrey’s sons. The place is at the base of the Erdtree, which is now fully engulfed in flames, and is an open area without any obstacles or areas that can provide any cover. Upon entering the arena, Godfrey can be seen carrying Morgott’s corpse as it dissipates into the air.

Godfrey will be using his giant battle axe to deal heavy-hitting swings, as well as create land-shattering attacks. Upon reaching <45% oh his health, he will enter his phase 2 and fight as his original form, Hoarah Loux.

Godfrey will swing his axe from side to side. He can chain this attack around two or four times depending on how close the player is, and he can also link it up with a spinning overhead swing. He can also do an upswing by dragging his axe on the ground as he charges at you before doing the swing.

To punish this attack, dodge and wait until he does his third or fourth swing as it would be likely for him to end the attack at these points. Then, come in to deal one to two hits before moving back. Be careful when he finishes with an overhead swing to the ground as he might immediately follow this attack up with an Earth Shatter attack.

Godfrey will wind up his axe on his left hand backwards, then swings it forward to the ground.

He will usually do this when you are outside of his close range, so pay close attention to the wind up and then dodge to the side before it connects.

Godfrey will raise one of his legs and then stomp the ground, releasing rocky spikes from the ground in a cone. He can do this with either his left or right leg. Another variation of this attack can happen once he is at his <60% health which has a circular hit zone around him rather than a cone.

Once he raises one of his legs, try to dodge towards him and also sideways to avoid the cone hit zone. He can also chain this with another ground stomp or axe swings. If playing in close range, time the dodge to roll through the shockwave, especially with the attack’s upgraded version.

Godfrey will thrust his axe towards the ground. He can also do this after jumping up high.

Dodge accordingly once he is at the peak of his jump. Pay attention once his axe is on the ground as he can follow this up with an Earth Shatter if he kicks his axe downwards even more.

Godfrey will raise his right leg while holding his axe with both of his hands up high. He will then hit the ground with the butt of his axe, sending a blast of shockwave that deals damage.

Either block the attack, time the dodge as the shockwave travels towards you, or stay outside his mid-range to avoid getting hit.

He usually does this attack after swinging his axe overhead. Pay attention to his legs; if he raises it while the axe is still stuck to the ground, expect that he will do this attack. You can dodge the initial shockwave, sneak one attack and then immediately pull back to avoid the second shockwave.

Here are additional tips on how you can beat Godfrey, First Elden Lord in Elden Ring:

Upon reaching <45%, he’ll enter a cutscene where he will lose his lion spirit Serosh and transforms back to his old self as Hoarah Loux. The guide continues on to the Hoarah Loux, Warrior Guide.