Elden Ring – How to Beat Magma Wyrm and Get Moonveil Guide

A guide on how to defeat the Magma Wyrm in Elden Ring. 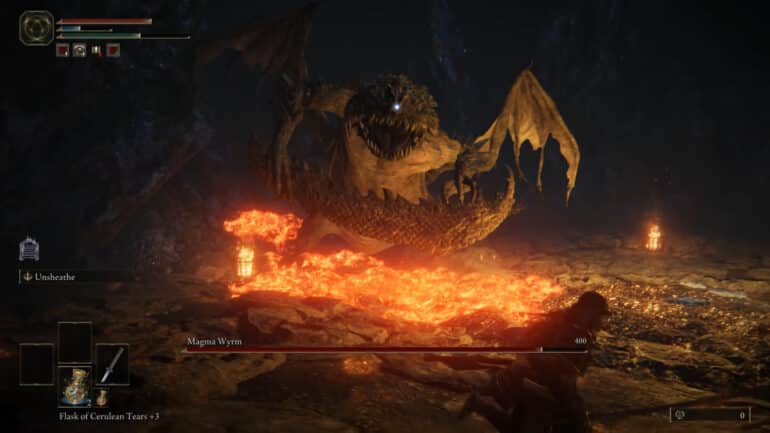 The Magma Wyrm of Gael Tunnel is one of the mini-bosses that players can fight in Elden Ring. This particular Magma Wyrm is highly sought-after since, once it is defeated, players will get the Moonveil Katana, one of the best katanas in the game.

In this guide, we will look into the Magma Wyrm’s attacks and how to react to them, as well as some tips to make the fight easy.

The Magma Wyrm can be found inside the Gael Tunnel, situated in the border of Limgrave and Caelid. It is located within a circular cave at the very end of the tunnel.

Magma Wyrm spits out a fireball that lands some distance in front of it.

The attack is easily telegraphed and can be avoided be just running to the left or right.

Magma Wyrm raises its front arms up from the ground while holding on its blade. It then slams back down leading with its blade, sending a small shockwave.

Its wind up is a bit slow and it can easily be avoidable. You can dodge roll through its shockwave or simply jump as it pases.

Magma Wyrm turns its head to the side looking backwards and spits out lava on its side. It can do this on either its left or right side.

If it prepares for this attack, pay attention to its head and dodge towards the side that it is not facing at. Be careful not to get hit or walk over the lava as it lingers for a few seconds.

Magma Wyrm spits out lava on the ground as it moves forward. If it does this near the cave’s wall, it will follow the curvature of the wall as it runs. It can chain this attack two to three times and the lava puddles linger for a few seconds.

Be careful not to get caught in front of the Magma Wyrm as it does this attack. Try to reposition towards its tail to avoid getting hit while also avoiding to step on the lava pools.

Magma Wyrm wil swing its blade horizontally in front of it.

Since it holds its blade with its right hand, dodge roll from your right to the left to avoid its swing.

Magma Wyrm will do an almost 180-degree turn, whipping its tail as well as its blade outwards.

Staying near its belly which is the center point of the body should keep you relatively safe from getting hit by either its tail or its blade.

How to beat Magma Wyrm Fight

Here are additional tips on how you can beat the Magma Wyrm in Elden Ring:

Defeating the Magma Wyrm will reward you with the following:

Check out this video by SweetJohnnyCage – Narrated Guides & Walkthroughs on how to defeat the Magma Wyrm: