A guide on how to defeat the Grafted Scion Spider Boss in Elden Ring. 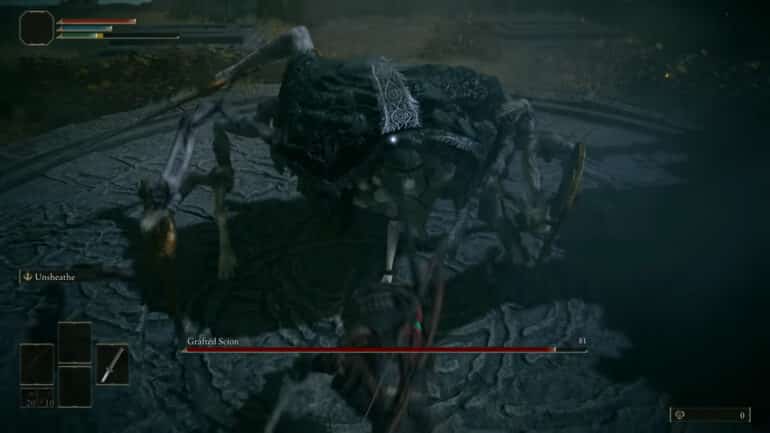 The Grafted Scion Elden Ring Spider Boss is a field boss that players can challenge and defeat in the game. It’s the first miniboss that players get introduced to literally at the first few minutes of the game. It also can be encountered again in different parts of the The Lands Between and is infamous for its speed relentless flurry of attacks.

Also known as the “Elden Ring Spider Boss”, the Grafted Scion puts up quite a challenge and sets every Tarnished’s expectations on how difficult the other bosses would be for the rest of their journey.

Though players are supposed to die at the first Grafted Scion encounter at the start of the game, it can be defeated and for those who are skilled enough to do so, they are rewarded with its Ornamental Straight Sword and its Golden Beast Crest Shield which offer a great boost at the early parts of the game.

In this guide, we will look into the Grafted Scion’s attacks and how to react to them, as well as some tips to make the fight easy.

The Grafted Scion Elden Ring Spider Boss can be encountered at these locations:

How to Beat the Grafted Scion?

The key to defeating the Grafted Scion Elden Ring Spider Boss like most enemies that send out a flurry of combos is to wait for openings. Dodging at the very last second is essential to not only avoid getting hit, but to also maximize the window of when it is open to attacks.

If your dodges still need more work, then wielding a good shield plus having enough FP will help you survive if you get caught in its combo.

Because of its grafted nature, the Grafted Scion can wield two swords and a shield. It can send out one to two sword swings from its right arms, which it can connect to a set of backswings, which can then connect to another set of sword swings or finish up with forward stab attacks. The swings between its arms have varied timing.

It can be challenging to read the swings because of the varied timing, so it’s safe to just wait out the combo and stay clear of its range until it goes for its heavier attacks.

The Grafted Scion raises both of its right arms high and then swing them both while spinning and attacking twice.

Make sure to dodge both swings or try to block with a shield. Stay clear from its path as it spins.

It raises is shield and then smashes it to the ground while doing downward sword stabs. It does this twice before jumping and landing shield first.

Stay away from its front side once it raises its shield, or you can move towards its back if you can to take advantage of the opening.

The Grafted Scion raises its shield high while jumping before slamming it into the ground.

The attack is telegraphed so you can dodge easily from getting hit.

It lets out a bloodcurdling screech that lowers the FP of those that get hit.

The Grafted Scion Elden Ring Spider Boss drops mainly just runes when defeated, except for the one found at the Chapel of Anticipation which also drops the Ornamental Straight Sword and the Golden Beast Crest Shield. The amount of runes it drops vary from 583 to 3,200 runes, and it increases on higher new game+ runs.

How to replay the Grafted Scion boss fight

If you failed the Grafted Scion Elden Ring Spider Boss fight the first time, worry not because you can go back to the Grafted Scion at any time. Travel westward from the Raya Lucaria Academy, past Stormveil Castle, and you’ll come to an elevated region known as The Four Belfries. You can use a portal here to teleport yourself back to the Chapel of Anticipation to replay the Grafted Scion boss fight.

Portals in The Four Belfries are activated by Imbued Sword Keys, which allow users to teleport to a variety of locations. There are only three Imbued Sword Keys scattered across the game, and can be found in the following locations:

Just a heads-up, as you emerge from the portal, you’ll seen an item on a cliff from behind you. Don’t get tempted to retrieve the item because as soon as you step foot on the cliff, it crumbles and you die. In any case, the item is unobtainable, so instead, just take the bridge immediately to the golden fog door to fight the Grafted Scion Elden Ring Spider Boss once more.

Check out this video by MenWhoStareAtGames in which he encounters a Grafted Scion: