A guide on how to defeat Hoarah Loux, Warrior in Elden Ring. 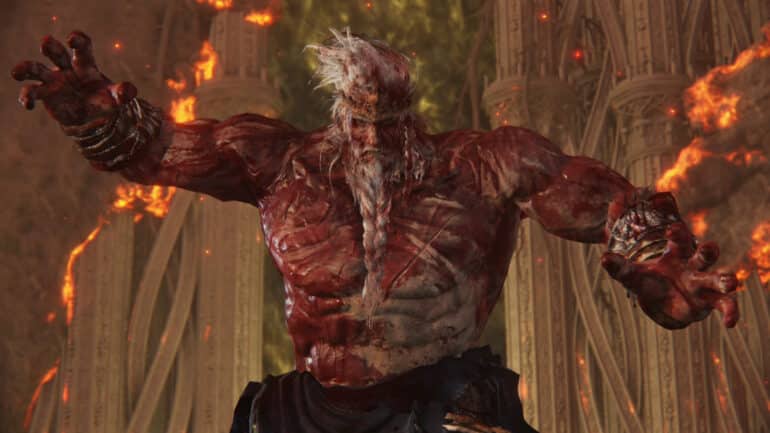 Hoarah Loux in Elden Ring is a legend boss that players will have to defeat in the game. Hoarah Loux is actually Godfrey, First Elden Lord’s previous identity back when he was still a chieftain. Compared to Godfrey’s phase, his phase of the fightis a lot more wilder and more explosive because of his uninhibited state.

In this guide, we will look into the the fight against Hoarah Loux, Warrior and share some tips and tricks on how to defeat him. This is a two-part guide, with the first part dedicated to the fight’s first phase.

Who is Hoarah Loux, Warrior?

Hoarah Loux was once a chieftain of the badland warriors. He was then engaged to Queen Marika and had to carry Serosh on his back to inhibit his bloodlust. Afterwards, he took on the name of Godfrey to better suit his more noble status. After defeating enemies and facing the Storm Lord by Queen Marika’s wishes, she then banished Godfrey from the Lands Between, making him the first Tarnished.

As you fight against him, he then relinquishes Serosh to take of the restraints from his long inhibited power, reverting to his previous self as Hoarah Loux.

You can find Elden Ring Hoarah Loux, Warrior’s arena will be the same place where you fought Morgott, the Omen King, who was one of Godfrey’s sons. The place is at the base of the Erdtree, which is now fully engulfed in flames, and is an open area without any obstacles or areas that can provide any cover. The fight with Hoarah Loux is considered as the second phase of Godfrey’s fight.

Once Godfrey’s health reaches <45%, he will become Hoarah Loux. His health will remain at the same level and will not regenerate. In this phase, Hoarah Loux will lose his axe and will only fight using his bare hands. He will be more agile and will use attacks that will throw players high into the air then slam them down into the ground.

Hoarah Loux will swing his arms towards the player several times as if to slash them with claws.

He will do this attack two to three times and is usually follow up with either a roar or a ground stomp.

Hoarah Loux will let out a roar that will knockdown anyone near him.

Though this move does not deal any damage, he can immediately follow up with another attack which can be dangerous especially when you’re recovering from being knocked down. Once you see him cross his arms above his head, immediately dodge away to avoid the shockwave.

Hoarah Loux will leap into the air and smash the ground with his right arm, followed by his left arm, releasing shockwaves per hit. The ground will start glowing and it eventually explodes as he lifts his arms out.

The first two shockwaves have short ranges and are easily avoidable. You still would have to move away from him as far as you can to avoid getting hit by the third explosion which deals considerable amounts of damage.

Hoarah Loux will raise his leg and stomp the ground, releasing a shockwave in a cone shape and a bunch of jagged rocks from the ground. In lower health, the hit zone becomes a circle around him.

Similar to Godfrey’s attack, either dodge away far enough to avoid the reach of the cone, or dodge towards his left or his right side. With the upgraded stomp, time the dodge roll right before his feet touches the ground.

Hoarah Loux will wind up his leg back and kick it upwards. Anyone who gets hit will be launched into the air.

He will usually doe this as a follow up attack, so keep an eye on his legs and try to evade towards his sides.

Hoarah Loux will wind his right arm backwards while his left arm grabs his right shoulder. He will then swings his arm forwards, attempting to grab the player in the process. If he’s successful, he will raise the player up high and throw them to the ground afterwards.

The wind up for this attack is obviously telegraphed and can be easily avoided by dodging away from him. Keep an eye out for a follow up attack or another grab right after.

Hoarah Loux will charge at the player with arms out on his sides. Upon reaching the player, he will then swing his arms upwards. If caught, the player will be launched upwards, during which he will also jump upwards, grab the player and fall down to the ground, smashing the player in the process.

Another variation of this attack is when he charges at the player with his arms crossed in front of him. If this attack connects, it will also launch the player upwards, but higher than the first variation.

Hoarah Loux will raise his arms up high and will also raise his right leg up. He will then smash the ground twice which releases damaging shockwaves throughout almost the entire arena.

The shockwaves can be dodged with proper timing. If you are far away for the first shockwave, time it as he stomps his feet as it will then be followed by his arms from which the shockwaves will come from. Then do another roll immediately after the first.

Here are additional tips on how you can beat Hoarah Loux, Warrior in Elden Ring:

Defeating Hoarah Loux will reward you with the following: