A guide on how to hunt a Garangolm in Monster Hunter Rise: Sunbreak 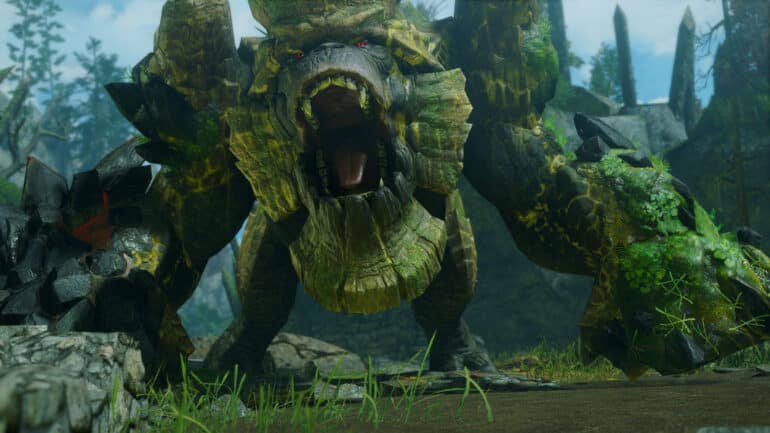 Garangolm is one of the new monsters in Monster Hunter Rise: Sunbreak. It is a behemoth that usually wanders through the Citadel, however the strange occurrences in the area has made it suddenly migrate to other locations, such as the Flooded Forest. Though it looks docile from a distance, a Garangolm is quite ferocious and is capable of destroying everything in its path.

In this guide, we will talk about Garangolm and share some tips on how to make the hunt for it more manageable.

A Garangolm is a fanged beast which resembles a huge ape with a large prehensile tail. Its design is based on the Dr. Frankenstain’s monster with its head looking flat and bulky, similar to the sci-fi monster. It is also known as one of the Three Lords of Elgado.

It is capable of secreting a sap that allows moss to stick and grow on its body, most especially on its arms. It can also harden the sap and make them tougher to serve as its armor when threatened.

Garangolm also has the ability to ignite one of its arms while the other arm gets soaked in water, which allows it to inflict both fireblight and waterblight depending on which arm connects to a target. It can use its flaming arm to create explosions, which it can also use to propel itself towards its targets.

Garangolm’s head can be quite challenging to reach due to its height, so targeting its arms is the next best option. Blunt weapons work effectively against its arms, while cutting weapons are effective against its head. Once the arms have been coated with their respective elements, their weaknesses also change, i.e: fire arm becomes weak to water and ice, water arm becomes weak to fire and thunder.

Because of its hulking body, it moves relatively slower than other lighter-built monsters, however hunters should pay attention once it enters its rage mode as it can use its fire arm to gain mobility.

The Garangolm has several moves and most of its attacks are pounds and jumps. Listed below are the most notable moves in its move set.

How to Beat Garangolm in Monster Hunter Rise Sunbreak

Upon encountering Garangolm, it will do its normal arm swings and leaps to attack players. It can’t inflict fireblight or waterblight at this point yet.

Garangolm grazes its left arm to the ground to gather moss and rocks, while it punches the ground with its right arm to gather explosive materials. It will be more agile, tougher and aggressive thanks to its arms. Hunters should be wary about the rocket jumps to avoid getting hit by them as they deal massive damage.

At this point, the party’s focus should be to attack the arms to destroy them. Once both arms are destroyed, Garangolm will revert to its normal state. Aside from its arms, its other attacks such as the rock hurl and belly flop should be avoided.

The Garangolm Layered Armor Set can be crafted with the following:

Check out this video by Boss Fight Database showing a hunt against a Garangolm: