A look at all the new and returning monsters in Monster Hunter Rise: Sunbreak. 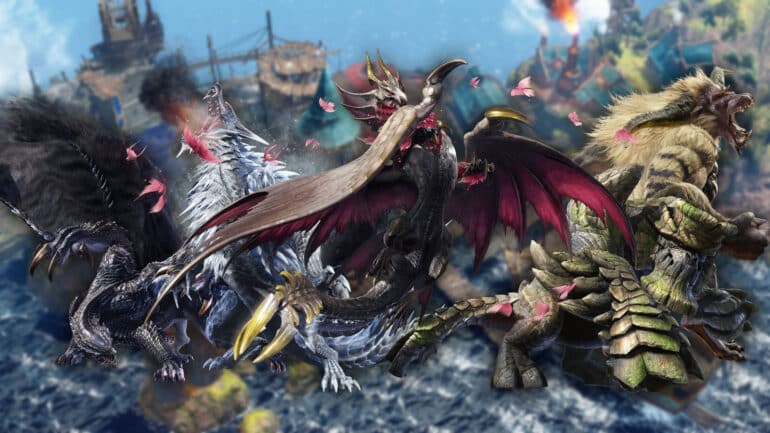 Malzeno is the flagship monster of Sunbreak and is one of the Three Lords of Elgado. We’ve made a couple of articles about Malzeno before, but now that the game is out, we have access to details that uncover more of its secrets.

Malzeno is an elder dragon that has been known to come out from the mysterious crater every 50 years or so, and whenever it shows itself, calamity follows. Which is why the Elgado Outpost has been established near the crater to prepare for its return.

Based from the western depiction of a vampire, Malzeno is known to suck the life out of its victims with the help of the Qurio, which are like winged leeches with mysterious origins. These Qurio has a symbiotic relationship with Malzeno as they’re the ones who swarm the prey and deliver its lifeforce back to Malzeno.

But the Qurio aren’t actually just co-existing with one monster, as later on revealed in the game, and they’re also known to be the vectors of some kind of a contagious disease known as the affliction that makes monsters mad.

Also check out our complete guide on the Malzeno, it’s weaknesses, how to beat, and the weapons and armor you can farm from it.

Lunagaron is a fanged wyvern that has the ability to lower its body temperature down, thus it can gown ice around parts of its body, and it can also dish icy attacks. Lunagaron is also known as one of the Three Lords of Elgado and is based on the western depiction of a werewolf.

Its first appearance is in the Shrine Ruins near Kamura, when it suddenly ambushed the hunter’s caravan while it was hunting for its meal. This is an unusual sighting due to the fact that Lunagarons are known to live in the icy caverns of the Citadel. The hunter is then tasked to investigate as to what caused the Lunagaron’s sudden migration.

Garangolm is a fanged beast that has touch scales and a tougher head. It secretes a sap-like substance around its body that allows moss to grow on it. It can also use this organic armor to possess both the water and fire element on each of its arms at the same time. Garangolm is also known as one of the Three Lords of Elgado and is based on Frankenstein’s monster from the western folklore.

Despite its hulking structure, Garangolm has impressive mobility which can be enhanced when he’s enraged. It can use his flame arm to cause an explosion pointed at the ground which will send Garangolm flying up and crashing down to an unsuspecting hunter.

Seregios is a flying wyvern best known for its sharp scales that it can shoot out towards its prey or hunters like quills or projectiles. Once hit with one of these scales, hunters will get the bleeding ailment which causes additional damage when hit. Seregios was first seen in Monster Hunter 4 Ultimate.

The bleeding ailment has been changed in Sunbreak; players will no longer get damage from performing actions other than walking, but these actions will instead fill up a buildup gauge. Once the gauge is filled, the next attack that the hunter will get will deal extra damage.

Astalos is a flying wyvern known to discharge large amount of electricity towards its aggressors. Its insect-like scales generate electricity when they rub one another, which Astalos can then channel through its horn, wings, and tail. Astalos was first seen in Monster Hunter Generations.

Sunbreak is Astalos’ first return to the main series since Generations Ultimate and only has one deviant subspecies which is the Boltreaver Astalos. This deviant subspecies may also find its return into Sunbreak through one of the free title updates.

Gore Magala is an unknown type of monster which has similar traits to elder dragons (i.e.: >4 limbs), however it still not categorized as such. Its dark purplish scale makes it look more like a Zenomorph from the Alien franchise, and it was also the cause of the Frenzy virus thanks to its scales. Gore Magala was first seen in Monster Hunter 4 Ultimate.

The Frenzy virus that it once spread is similar to how the affliction affects other monsters; afflicted monsters turn more violent and hostile towards hunters and other monsters, plus they also gain the ability to leech off life from others thanks to its bloodblight.

It was first speculated that its Chaotic Gore Magala variant will also appear in Sunbreak due to an armor seen in the demo that looked like it belonged to the monster’s tree, however this has been debunked. Though that does not erase its chances completely as Chaotic Gore Magala may also get added through the free title updates.

Shagaru Magala is an elder dragon and is also known as Gore Magala’s adult form. Gore Magala sheds its dark scales and gets replaced with glittering scales which turns its entire appearance completely without changing most of its body structure. Shagaru Magala was first seen in Monster Hunter 4 Ultimate.

Shagaru Magala’s movement and demeanor is similar to an enraged Gore Magala, however Shagaru Magala has an even stronger rage state which it can go into more often that most monsters do. Its Frenzy virus is more potent and has a wider reach that can can infect even stronger monsters.

Espinas is a flying wyvern known for its poison spikes and its very deep sleep. It is similar to a Rathian in body structure, however it is spikier all round its body than the latter which allows it to deal poison damage with pretty much any of its attacks. It’s also known to be a peculiar monster as it takes some considerate amount of damage and disturbance for an Espinas to be awoken from its slumber or to retaliate from an attack. Espinas was first seen in Monster Hunter Frontier

The addition of Espinas to Sunbreak is such a huge news since it has been a while since a monster from an exclusive side series like Frontier has been added into a main series. This gives much hope for other exclusive monsters to appear in Sunbreak or in other future main series titles.

Daimyo Hermitaur is a carapaceon known for its Monoblos skull shell and its big meaty claws. It can use its shell to dig underground and attack hunters from below. It also knows how to jump high and crash down on a hunter. Daimyo Hermitaurs can shoot out jets of water from its mouth and can grab a hunter with its claws, rendering them unable to move for a while. Daimyo Hermitaur was first seen in Monster Hunter 2.

Along with the Daimyo Hermitaur’s addition into Sunbreak, their juvenile Hermitaurs can also be seen near wet areas scavenging for food.

Shogun Ceanataur is a carapaceon known for its aggressiveness and its blade-like claws. It is a nimble monster capable of crawling upside-down on ceilings and shooting jets of water from the shell on its back. It can be seen using different kinds of shells, including the skull of a Gravios. Its shell can be broken off completely, exposing its nub which it then tries to protect by burrowing and finding another shell. Shogun Ceanataur was first seen in Monster Hunter 2.

The juvenile Ceanataurs can also be found accompanying an adult Shogun Ceanataur and can be called upon during combat.

Pyre Rakna Kadaki is accompanied by its younglings called Pyrantulas. They also take on the blast ailment, essentially making them bombs that Pyre Rakna Kadaki can use to throw at hunters and cause explosions.

Blood Orange Bishaten has learned many ways of how to use its pinecones effectively. It can set them on fire with its breath to throw them at hunters, or it can forcefully throw them on the ground to create an explosion. It can also make them spin or bury them in the ground like explosive mines.

Magma Almudron is a leviathan and is a subspecies of the Almudron. It has adopted to survive in melting temperatures and can swim through molten rock. It can also grab a glob of lava with its tail and fling it towards hunters. Magma Almudron is first seen in Monster Hunter Rise: Sunbreak.

When out of the ground for too long, Magma Almudron’s scales become too hard for weapons to pierce and deal damage on until it gets heated up again, similar to the Agnaktor and Lavasioth.

Aside from its coloration, Aurora Somnacanth kept most of its common variant’s body features. It can also spew out a jet of icy breath that has a long reach, and can cause freezing explosions using its scream.

Scorned Magnamalo is also more hostile and aggressive than the common Magnamalo, and is almost always engulfed in Hellfire. It can also control its Hellfire in many different ways, making it more dangerous to engage with regardless of the hunter’s proximity.

Furious Rajang is a fanged beast and is a variant of Rajang. The Furious Rajang appears to be constantly in its enraged mode because of its golden fur, but it can actually still go into its rage mode where its fur hairs stand up as electricity course through them. Furious Rajang was first seen in Monster Hunter Freedom Unite.

Furious Rajang gained its power when it lost its tail which is considered as the Rajang’s weakpoint. It has excellent mobility, making it hard for hunters to catch up and land a hit. Furious Rajang also has its electric attacks incorporated in some of its moves, making them deadlier.

Gaismagorm is an elder dragon and is considered to be Sunbreak’s big boss. Like Malzeno, it has lived for years underground and has also gained a commensalistic relationship with the Qurio. The Qurio latch on to its body and crystallize as they give their collected lifeforce to Gaismagorm. Gaismagorm is first seen in Monster Hunter Rise: Sunbreak.

Its awakening is causing another disruption in the ecology surrounding Elgado as the Qurio become active once more and is making the other monsters more hostile by spreading the affliction.

Lucent Nargacuga is a rare species of the Nargacuga which appears to have a silvery white coat, in contrast to the Nargacuga’s black coat. Despite this, it has the ability to turn itself invisible which helps it harder to track, hence its rarity. Lucent Nargacuga was first seen in Monster Hunter 3 Ultimate.

Lucent Nargacuga is way more aggressive than the common Nargacuga and will most likely be seen in the Forlorn Arena only. Lucent Nargacuga will be added into Sunbreak in a future free title update.

These scales can turn purple in color, which explodes in a much violent blast. Only when all of its scales are gone does the Seething Bazelgeuse revert into its less hostile state. Seething Bazelgeuse will be added into Sunbreak in a future free title update.

There will be more that coming in the next coming months when the free title updates go up, so stay tuned.

Check out this vide by Boomstick Gaming showing tips on how to beat each of the monsters: