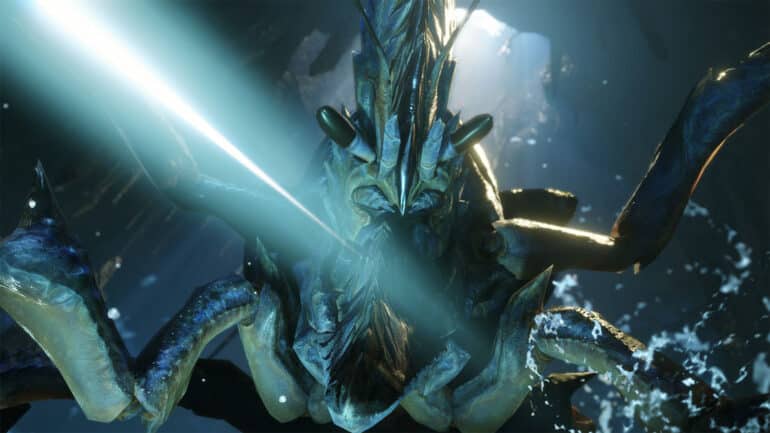 In this guide, we will talk about Shogun Ceanataur and share some tips on how to make the hunt for it more manageable.

Shogun Ceanataur is a carapaceon known for its blade-like claws and its interchangeable shell. Its has a blue exoskeleton and super sharp and durable claws that can extend to have a very long reach. It can use these claws to attack hunters, as well as dig underground to retreat or to find new shells.

When it comes to its shell, the Shogun Ceanataur can find and switch to another shell when it needs to. It can be encountered carrying its original shell, a Gravios skull, or a conch shell. Once its first shell is broken, it will retreat and dig down to look for a new shell. While it is shell-less, its sensitive nub part will be exposed and can be targeted to deal damage to its torso.

Having a bit more leaner body structure than the Daimyo Hermitaur, Shogun Ceanataur can cling on cave ceilings and unleash their attacks down towards their targets.

Though the Shogun Ceanataur’s shell is resistant to cutting and shot damage, it can still take minimal damage from them, and it takes significant damage from impact weapons. Breaking the shell will make the monster vulnerable for a few seconds before it digs underground to look for a new shell.

Its claws and arms are its toughest parts and require a high amount of sharpness for attacks to be able to cut through. It is recommended to also use impact weapons against the arms to make quick work of them.

Shot weapon users are best to focus on the head as it lowers the need to go within a Shogun Ceanataur’s extended range.

The Shogun Ceanataur has several moves and most of its attacks are claw slashes. Listed below are the most notable moves in its move set.

How to Beat Shogun Ceanataur in Monster Hunter Rise Sunbreak

Shogun Ceanataur is usually found scavenging around the area with its claws folded. The shell that carries on its back can vary, but it won’t offer Shogun Ceanataur any stat difference.

It can still do its Bladed Claw Slam in its normal state, so watch out for when it prepares its claws for the attack.

When Shogun Ceanataur enters its rage state, bubbles will start foaming from its mouth and it will extend its bladed claws, essentially doubling its reach with its claw attacks. It will also start doing its underground attacks often.

During this state, more of its attacks will start inflicting bleeding due to its extended claws. Be sure to avoid its blades as much as possible by positioning at its backside or just out of its reach. Bleeding can be easily cured by crouching so long as you head to a safe place first.

The Ceanataur Armor Set can be crafted with the following:

The Shogun Ceanataur Layered Armor Set can be crafted with the following:

Check out this video by Boss Fight Database showing a hunt against a Shogun Ceanataur: