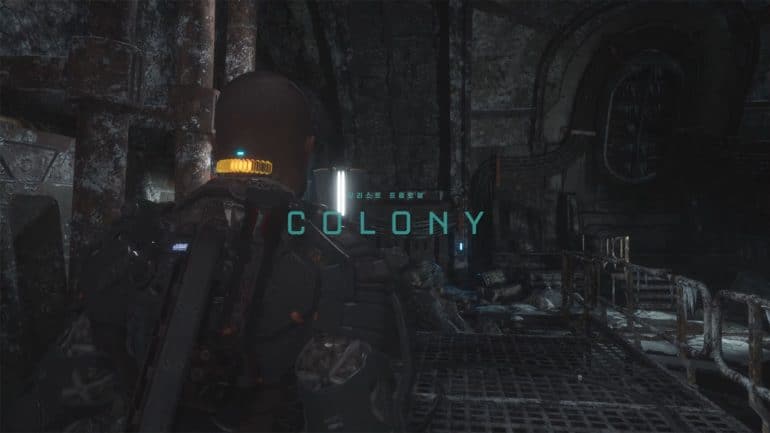 Colony is the seventh chapter of The Callisto Protocol where Jacob and Dani head deeper in the old mining colony to try and find an exit back to the surface and out of Callisto. Along the way, they’ll find out more about the contagion and the truth behind the infestation.

In this guide, we will go through the events in Chapter 7: Colony of The Callisto Protocol, sharing tips and listing down any collectible that can be found in the chapter.

The chapter picks up on Jacob’s arrival at the service tunnel after alighting the platform and defeating Two-head.

Follow the path towards the lit area and you’ll see a corpse with the Data-Bios #33: Alex Wang: Miner Log 1. Proceed to the path upwards until you see the light tower.

After the short dialogue with Dani, move towards the left and turn left to see the shelves that has the Data-Bios #34: Derryn Barr: Miner Log 2.

Head down the ladder and follow the path until you encounter Blinds that you can sneak by or kill. It’s a like a maze through shacks and houses in this area with lots of hiding places. Head towards the gate and use the panel to access the elevator. It will not work as you’ll need a keycard.

Head to the right and climb up the ladder next to the Midtown sign. Head inside the house on the left and check the corpse to get the Data-Bios #35: Derryn Barr: Miner Log 3. Go round the houses on the right until you reach the restrooms where you’ll find the Assault Rifle Schematic.

Finally, head to the Security building and inspect the infected on the wall to get the keycard.

Return to the Elevator

Go back down to the elevator control room and be aware about the lying grunt inside of it. Some Blinds will also respawn so be careful.

Ascend the Elevator to Hightown

After using the keycard, go inside the elevator beside of the building.

As you exit the elevator, examine the corpse on the ground to get the Data-Bios #36: Yannick Sage: The Mole.

Head up the stairs to the right to reach HighTown. You can check the door on the left for some loot and a Mutated heavy, then proceed to the path on the right where there are grunts.

Up the stairs, go to the house on the right where you can get the Data-Bios #37: Buidhe Reddwork: HighTown.

Follow the sign that leads to the Bathroom where you can get a gate fuse. Pick it up for later. Check the house beside this one to find a crate with loot. Then make your way back, climb the stairs heading to the left and you’ll find a gate panel that needs a fuse. Place the fuse in it to access the door.

Once you’re inside, there’s a Reforge station that you can use and a corpse that you can examine to get the Data-Bios #38: Ji-Kwan Park: Miner Log 4.

Climb the ladder after you’re finished looting and upgrading and you’ll see another enemy up ahead. Follow the path forward and you’ll eventually meet up with Dani again.

During the cutscene, another Two-Head will appear. The attacks and tactics are similar to the one you faced before, only this time grunts can join in the fight. It also appears that this boss has slightly more health than the previous one. You can head inside the houses around the area to get some ammo from the small crates. Still go for ranged attacks and only go for melee when it’s down.

After the fight, follow Dani as she navigates through the next areas. You can take detours to get some loot, but there’s no collectible to be found at this point.

You’ll be separated from Dani again as you fall down into another infested area. The next room up ahead has a Reforge station and a bunch of loot. Exit through the other door and you’ll find yourself back in LowTown. There will still be enemies popping up in this area, including Combustors so keep your guard up.

Like before, make your way to the stairs that lead to MidTown. Dispatch the enemies that block your way, then head straight and turn left towards the door to meet up again with Dani.

Continue following Dani through the next areas. You can do some quick detours to the side paths to find loot like a pristine decoder. Before turning left to the lift, there is a staircase that leads to another Reforger station should you need one.

Investigate the Lab / What Lies Beneath Achievement

Go through the door and through the corridor while Dr. Mahler’s hologram is playing. Behind the final door is the corpse of an alien lifeform and some more details as to what started the contagion. You’ll also be rewarded with the What Lies Beneath achievement.

After a few moments, Cpt. Ferris will show up again and and a fight ensues. He attacks with 3-5 swings so try to evade all of them and anticipate his body movements. After his swing combo, you’ll have the chance to counter attack; you can only do a swing with your baton and a follow-up shot, anything over this will be blocked and countered. Dani will eventually arrive and help you escape.

Exit the Colony on the Funicular / Data-Bios #39

Move up to the elevator platform and use the terminal to power it up. After the cutscene, you’ll arrive at the next area. Directly to your right is the Data-Bios #39: Duncan Cole: Disagreement. There’s also a bunch of health gels on top of the crates and a Reforger station by the gate. Continue through the gate to initiate another cutscene and the chapter ends afterwards.

Here are the achievements that can be obtained in chapter 7:

Also watch this video by BuffMaister showing the gameplay for Chapter 7 – Colony: