A complete guide on how to beat every encounter in Destiny 2 Duality Dungeon. 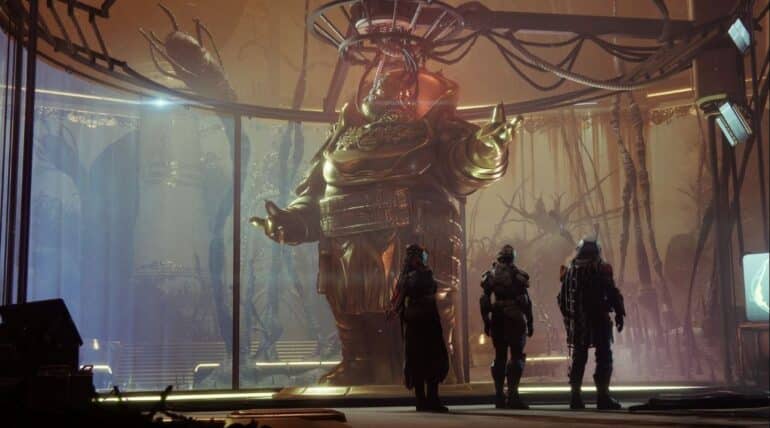 The newest Destiny 2 Duality Dungeon is the latest addition to Destiny during Season 17 which was released At 10AM PST / 1 PM EST / 6 PM BST/ 7PM CEST on Friday, May 27, 2022. The dungeon can be accessible by using the Witch Queen Dungeon Key, which also grants entry to the Season 19 dungeon.

This Destiny 2 Duality Dungeon guide is a complete walkthrough on how to complete every encounter for this Season 19 dungeon.

Destiny 2 Duality Dungeon will be available to players who already own The Witch Queen Deluxe Edition or have updated their existing Deluxe copy to this version. The dungeon will be set at 1550 power level with the master level set at 1590. And just like Grasp of Avarice master mode will reward Artifice Armour.

How to start the Destiny 2 Duality Dungeon

To start the Duality Dungeon you need to obtain a quest that is given by Suraya Hawthorne in the Tower. Simply talk to her, and she will tell you to do the dungeon and then it will be playable on the moon.

The Dungeon is divided into three main encounters and various traversal encounters:

At the Start approach Eris and after a while the floor opens up underneath the statue of Calus. So go down the hole in order to start the encounter. This will teleport you to a room which is barred from one side. With the other side of the room being barred off by this entrance, with a glowing red bell in the middle of the room.

Also one should be careful about being in spaces which may not have any floor in the other dimension. As this will kill you or just be a very hard thing to navigate. The rest of the way is pretty straight forward with the navigation of the place using the bell mechanic. This leads up to the first real encounter in the Dungeon.

This Encounter takes place in a squarish room with four symbols placed along it and with two bells on either sides of the room. The four symbols are also dunking points to certain aspects which will be found later in the encounter. The four Symbols are as the following (in order from the picture left to right) and these symbols will be used across the other encounters:

From where you enter and place the flag, Chalice is at top left, Sun is at top right, Axe is at bottom left, and War Beast is at bottom right. Now, use one of the bells to enter the nightmare realm and start the encounter.

There will be big doors in the normal dimension which will not be open but once in the nightmare dimension two these four doors will randomly open up with Standards carrying two of these symbols. The players will need to get these symbols and then teleport back to the normal realm and dunk these at where their respective symbols are.

Players also will have a timer on the side of your screen. When that timer hits zero, you will die. To get rid of the timer, you must return to the normal dimension by shooting the same bell you used to get it with. (The other bell will not be present.) However, this bell will be closed. In order to open up the bell so that it can be shot again, you must kill the two Nightmare Bellkeepers that spawn where the other bell would be. These bell keepers blocks the bells from opening up. So must be defeated.

This opens the doors in front of the symbols to open up with adds of its own. This is where the team will need to split up as the symbols will always be in opposite direction. Out of the three players one must be in the middle room clearing ads and ready to ring the bell with the other two players going into the rooms. Each of these players will face many copies of the Nightmare of Gahlaran.

Defeating these copies on either side makes the boss vulnerable and the DPS phase starts with the Nightmare of Gahlran. With the “Nightmare Collapsing” timer as a DPS check.

So be sure to have the Bellkeepers dead and start leaving the Nightmare dimension within 5 to 8 seconds left if you are not the one facing the boss. Once done rinse and repeat until the boss dies. This will give players the first real loot from the Dungeon.

The encounter is continued with some traversal with a lot of platforming and basic switches as seen in Destiny 2. The end of this culminated with a room with four statues in it, and the bell in the middle of the room. There is a secret chest in this room which can be easily accessed.

After entering the room there are six places to dunk the symbols on the floor just as with the previous encounter, placed around in a circle, and two bells on either side of the arena. In the normal dimension one bell is in the front of the arena and the other one in the back, up some stairs. Only one of the bells will be present at a time, the other will not. 2 Nightmare Bellkeepers will spawn under the empty bell. Two of the plates will have symbols above them.

So as before, one will need to go to the other dimension and bring back things to dunk in accordance with the symbols which are shown in the Vault. In the nightmare dimension, the room is expanded to have four connecting halls on the either corners of the room. There are symbols in these rooms to indicate what symbol they carry and the symbol spawns as soon as the Standard there is killed.

Also two nightmare Bellkeepers are to be killed to spawn the bell and open it in the nightmare dimension. The rooms of the symbols are constant and are in the following order:

Once two symbols are dunked, defeat the mini boss before dying from the timer. This is to be done three times. Note that the Mini boss also seems to change its shield around but it is not a problem in Normal Dungeon but we would assume it would be more of a factor on Master. Doing it thrice with all symbols dunked six times completes the encounter and will allow you to collect the loot. Once done the Vault opens up leading the players to the Final Encounter.

The Main boss of this encounter is the Nightmare of Princess Caiatl as remembered by her dad and not the Empress Caiatl she is today. This encounter is the cumulation of all of the previous encounters. There are 3 bells in both dimensions One on left, one on right, one on back mid. There symbols to be dunked as before and the Standards for these symbols are on platforms in the Nightmare dimension. The symbols can be seen in the normal dimension before teleporting. And the order is the following:

Kill the standard bearer in Nightmare dimension and kill the yellow bars on the either side of the room to extend the “Nightmare Collapsing” timer. As before, clear the Bellkeepers to open one of the three bells and go to the normal dimension to dunk the symbols.

Do it for four symbols ad the huge bell in the middle will be ready to be rung (with a notification saying “the bell is ready to be rung” on the bottom left). There will be a lot of adds in this encounter especially snipers so be careful and clear the room fast as things can get pretty rough. Once done ring the bell in the Middle to be teleported to the Nightmare room for DPS.

The DPS phase of the boss is very short and need to be done fast. Kill all the Bellkeepers asap and wait for the Nightmare of Caiatl to move towards one of the three bells. Once close, ring the bell to stun lock her and do the damage. I would recommend Liner Fusion Rifles as the boss can be very close ranged and rockets are not advisable. She will move form one bell to another one by one for all three. Once done rise and repeat till the all players kill her. That’s the end of the Dungeon.

I would recommend Linear Fusions along with at least one of the players running fully ad clear weapons as the room can get hectic. Note that just like Grasp of Avarice Dungeon, there will be two chests so one will get two weapons or armor here for the loot.

The Destiny 2 Duality Dungeon overall has a lot of new loot, namely:

One guaranteed Drop is the “The Deepest Truth” Emblem for completing the dungeon.

The Exotic seems to be a random drop at the end. The new armour set is ok but the weapons look great. But on the master version, it will become Artifice Armour which is very good.

On a whole the new Destiny 2 Duality Dungeon is a pretty solid dungeon with great encounters. We personally prefer Grasp of Avarice but this dungeon is really good. The weapons and their aesthetic are cool along with the foreboding atmosphere of the Dungeon.

Destiny 2’s raids have always been the premium endgame activity. But they are not always accessible to all players as raids require a fireteam of 6 to tackle. Dungeons are a good middle ground for something akin to mini-raids with three player activities and no matchmaking.

Also check out this video by Misleading on his Destiny 2: Complete DUALITY Dungeon Guide: