A guide on how to defeat Gaismagorm in Monster Hunter Rise: Sunbreak. 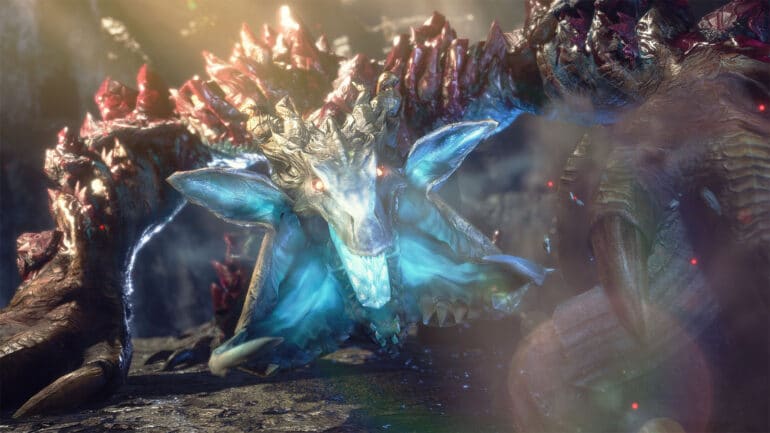 Gaismagorm is one of the new monsters introduced in Monster Hunter Rise: Sunbreak and is the game’s final boss monster. As the hunter and the team stationed in Elgado go through their investigation, they find out that the main source of it all is Gaismagorm’s awakening which has been told in ancient myths and texts.

In this guide, we will talk about Gaismagorm, how its hunt works, and how to survive the encounter.

Gaismagorm is an Elder Dragon from old legends who has been living underneath the Elgado crater for hundreds of years. Its head and body structure is somewhat similar to Narwa and Ibushi, having six limbs and a double jaw although it is not capable of flight and is almost twice the size. Due to its living environment, it takes on a sickly and dull skin with crystal like scales on parts of its body that are actually made of crystallized Qurio.

Because of Gaismagorm’s re-awakening, this made the Qurio active again in searching for nutrition to bring back to their host. Strong monsters like Malzeno can withstand the consequences of becoming a host to the Qurio, however weaker monsters succumb to its effects and become what is known as the afflicted monsters.

Gaismagorm’s head and wingarms (biggest limbs) are its weak points, however they are also the most dangerous parts to target because of its attacks. Its head is also almost at a high level that most melee weapons cannot reach. Since it relies on its wingarms to stand more than its other limbs, doing enough damage to them will cause Gaismagorm to fall over, creating an opening to hit its head.

Gaismagorm is extremely weak against the dragon element, followed by thunder. There will also be parts in the hunt where hunters will be able to use a dragonator and the barrage ballistae to deal damage to Gaismagorm.

Gaismagorm leverages the power of the Qurio plus its sheer body size to inflict damage to hunters. Listed below are the most notable moves in its move set.

How to Beat Gaismagorm in Monster Hunter Rise Sunbreak

During the first phase of the fight, Gaismagorm will do its body attacks and shoot out some energy balls. The attack to look out for is the 180 Jump which will always precede the Inhale and Energy Ball Smash. The suction is way too strong to counter even when using wirebugs that it is important to stop attacking and prioritize hiding behind a boulder. The suction will not do damage, but the Energy Ball Smash will.

Look out for the Dragonator Signal and once it becomes available, use it right away. Once enough damage has been dealt to Gaismagorm, a dragonator cutscene will initiate (skippable) which will do massive damage to it and send it to the lower level for the next phase.

In this second phase, Gaismagorm will do more attacks. You need to look out for the Blood Showers and the Swings as these do significant damage.

Gaismagorm will do several attempts to scale a high wall to eat the Qurio that are on the wall’s side. During this time, look out for the circle shadows on the ground where the barrage ballistae will drop. Use the ballista to shoot down the blood orbs that appear on Gaismagorm’s back to dispel them. Dispelling all three blood orbs before Gaismagorm reaches the top will cause it to drop on the ground and become open for hits.

If Gaismagorm manages to eat all Qurio on the wall, it will blast a beam of blood energy on the ground. Immediately leave the ballista and get to a safe area where the ground does not glow red. After the beam ends, a huge explosion will happen which will destroy the ballistae and any hunter that gets caught in the blast.

This ballista shootdown will happen twice in the second phase. If Gaismagorm is successful at the second attempt, it will enter the final phase of the fight.

In the final phase, Gaismagorm will shoot out blood energy from its back which will resemble wings. The sky will also turn red because of it. It will then start doing the Rocket Arms and Energy Ball Rampage attacks.

This is the most dangerous phase of the hunt as the attacks will hit so hard and they happen almost immediately after each other. Gaismagorm will still try to make an attempt to scale the wall and get more Qurio, but the ballistae will not be ready on time. This will initiate another cutscene where Fiorayne will throw herself at Gaismagorm’s back to land a massive blow, which will cause it to fall down.

If this blow manages to slay Gaismagorm, then it will complete the fight. Otherwise, the fight continues until it is slain.

The Archfiend Armor Set can be crafted with the following:

The Gaismagorm Layered Armor Set can be crafted with the following:

Check out this video by Boss Fight Database showing a hunt against a Gaismagorm: