God of War Ragnarok – The Weight of Chains Favor Walkthrough 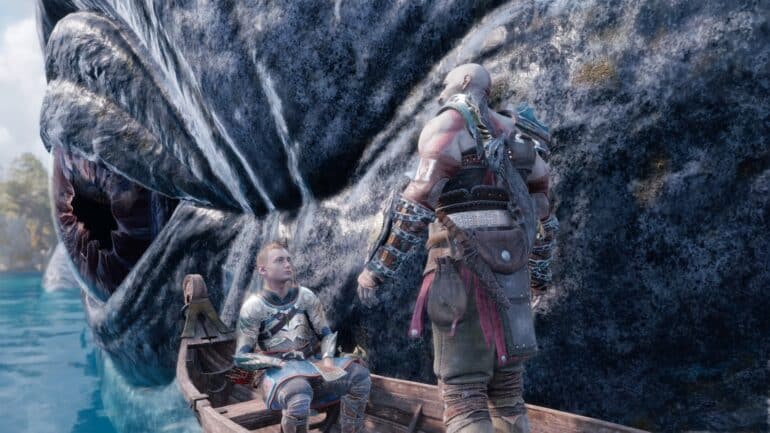 Mimir’s regrets are the front and center of the Weight of Chains Favor in God of War: Ragnarok. During their quest to look for Tyr on Svartalfheim, Mimir asks Kratos for a favor involving something he has long felt guilty of. He hopes to right this wrong but for the smartest man in all the nine realms, he didn’t see the end coming for something Kratos is far more familiar with.

In this guide, we’ll go through steps needed to complete The Weight of Chains favor and what it means to Kratos and company.

The Weight of Chains Favor Walkthrough

The whole thing begins the moment the company decides to explore the Bay of Bounty for a little bit. After partially liberating the Watchtower and encountering a locked door, Mimir will ask Kratos to retrieve a key from Lyngbakr Island.

The key will be close to the Southern dock of the island. Once picked up, you can head back to the locked door and there you will be asked to ring a gong. The ringing gong summons the Lyngbakr. A creature Mimir tricked into putting on chains and has since provided resources to the Aesir… until it was no longer of use.

The newly risen dock on the creature’s lower back is your point of entry. Disembark and you’ll be making your way around the creature, breaking chains as you go. There are 3 chains in total and you’ll need to break them in order to free the creature.

The first one isn’t too far off from the dock. Just a quick QTE and you’re done. While all this going on, Mimir details everything about what’s happened to the creature and how it was on him to see it free once more. Kratos doesn’t speak much on the matter. He knows something about being kept in chains but we’ll save that for later.

You will then spend the rest of the time battling the Draugr that lay dormant on the creature’s back until you reach the higher platform. You’ll only be going up one level throughout this entire Favor. You won’t have access to the highest platforms on the creature’s back. That’s another Favor for another day.

Now that you’re done clearing what’s left, head back down to the dock and take the boat around to the new dock you’ve opened up. You may get a random tale or two while making your way there.

The two platforms near the tail are going to be crawling with enemies. Take them out in whatever way you see fit. After that’s done, you’re going to open the gate to the next and final area.

Break the chain holding the beast in check and all should be ok. But something has gone wrong and Mimir will ask you to take him to meet the creature, eye to eye.

The conversation is short and brief and Mimir struggles to comprehend why the creature won’t just up and escape already. Kratos explains that chains have a habit of holding their captives down. And if kept long enough, they’ll lose their desire to leave. But that doesn’t mean the creature isn’t free. It is. And according to Atreus, it enjoys basking in the sun.

And that’s it for this favor. The good news for players is that completing the quest will earn them the “Making Amends” silver trophy.

Watch this walkthrough video by Backseat Guides for God of War Ragnarök’s The Weight of Chains Favor: