How to Make French Fries in Disney Dreamlight Valley 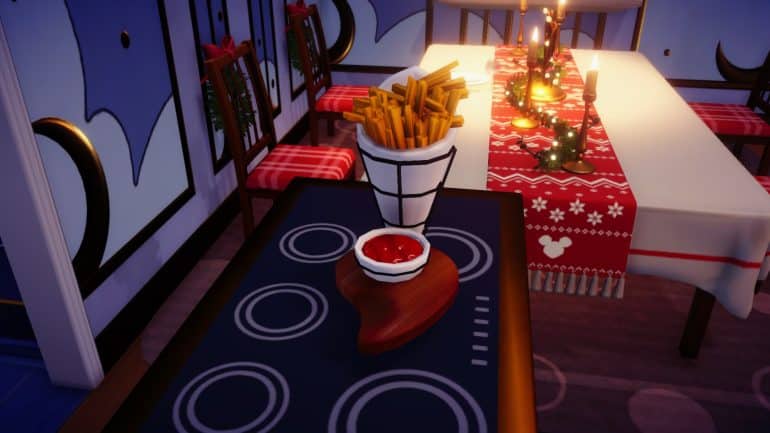 French Fries is among the various dishes you can cook in Disney Dreamlight Valley. It’s a 2-star Appetizer, and eating it is a good way to restore some energy, or you may give it to a villager as a gift to boost your friendship levels. While this dish calls for a lesser composition, obtaining its ingredients can be a challenge since it’s located in an end-game biome. As such, if you’re wondering how to make French Fries, here’s what you need to do.

The ingredients needed to make the Disney Dreamlight Valley French Fries Recipe are as follows:

French Fries can be cooked at any cooking station, just like any other dish. Remember that you’ll need 1 coal ore for every dish you make as well.

How to Get French Fries Ingredients?

Potatoes can only be obtained once you’ve unlocked the pathway through the Forgotten Lands, which will cost you 15,000 Dreamlights.

However, you won’t be able to access the Forgotten Lands until you’ve unlocked Sunlit Plateau, which costs 7,000 Dreamlights. This means that Potatoes are only obtainable after spending a stunning 22,000 Dreamlights to unlock both Biomes.

Once you’re in the Forgotten Lands, you can then repair and upgrade Goofy’s stall for a few thousand Star coins, which then sells Potato and Potato Seeds. The Regular Potato will cost you 189 Star Coins each, while Potato Seeds cost 55 Star Coins per pouch.

As for Canola, it can only be obtained once you’ve unlocked the pathway through Forest of Valor, which will cost you 3,000 Dreamlights.

Once you’re in Forest of Valor, you can then repair and upgrade Goofy’s stall for a few thousand Star coins, which then sells Canola and Canola Seeds. The Regular Canola will cost you 164 Star Coins each, while Canola Seeds cost 25 Star Coins per pouch.

Players can also get Potato and Canola if they repair WALL-E’s Garden. Once fixed, WALL-E will plant random crops on the open plots within the garden and they will always be in a watered state. However, the biomes you’ve already unlocked in the valley will determine the crops that are planted.

If you like this guide, be sure to check out our other Disney Dreamlight valley articles:

Also watch this video by Greymane Gaming on How to Make French Fries in Disney Dreamlight Valley: