A guide on how to get and use Perception Shards. 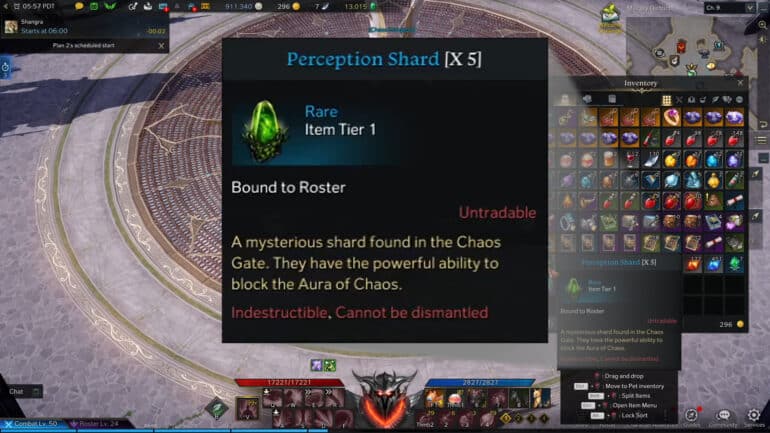 Perception Shards in Lost Ark are considered to be a different kind of currency that is mostly used to exchange with a bunch of other stuff such as Stone Fragments, Harmony Shards, and Engraving Recipe Pouches, just to list a few. Learn where to get these shards and how to make the most out of them in this guide.

What are Perception Shards in Lost Ark?

Perception Shards are a type of resource that can be dropped by defeated enemies. They are used to exchange for other materials to power up your character and its gear. It does not have any use by its own.

Perception Shards act like a special currency that can be exchanged with Chaos Dungeon vendors who appear outside the Dungeon entrances and sell rare items ranging from Stone Fragments, Harmony Shards, to Engraving Recipe Pouches.

Where to Get Perception Shards?

Perception Shards can also be obtained from other quests and purchased from the secret shop, but the best method to get them is to just play Chaos Dungeons.

The Chaos Dungeon is an endgame dungeon similar to the dungeons that you have gone through before at this point. The difference is that the enemies are harder and they come in massive hordes.

How to Unlock Chaos Dungeons

You have to complete the “Ealyn’s Request” quest in order to unlock the Chaos Dungeons.

How to Play Chaos Dungeons in Lost Ark

Chaos Dungeons have several sections that have different objectives, as follows:

Perception Shards can only drop from Tier 1 Chaos Dungeons that require no more than 580 item level. If a player enters a higher tier Chaos Dungeon, the drops will be replaced with either Guardian Shards or Shards of Purification.

Check out this video by ZaFrostPet on how to farm Perception Shards: