A guide on how to defeat Magma Almudron in Monster Hunter Rise: Sunbreak. 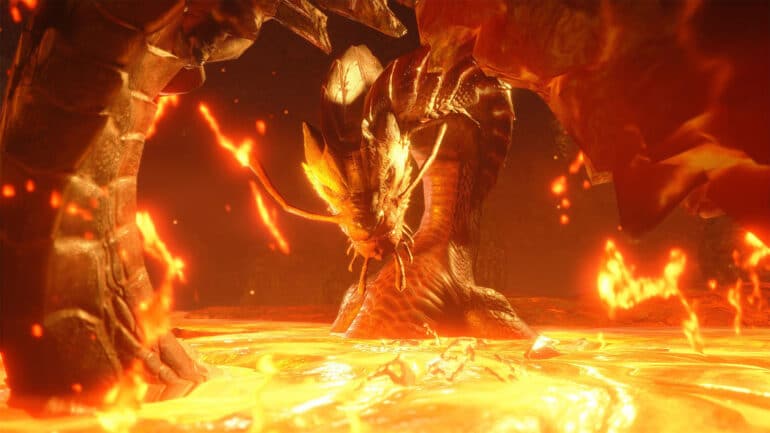 Magma Almudron is one of the new monster subspecies introduced in Monster Hunter Rise: Sunbreak. It has adapted to living in the volcanic region, and therefore can now swim through magma rather than just mud. The danger of dealing with molten rock will surely make its hunts a lot more challenging.

In this guide, we will talk about Magma Almudron and share some tips on how to make the hunt for it more manageable.

Magma Almudron is a leviathan and a subspecies of the common Almudron. It has developed a special kind of liquid that it secretes from its body which allows them to melt through solid rock in order to swim through it. It also retained its ability to grab a huge boulder with its prehensile tail to use as a hammer for its attackers.

When it is above ground, Magma Almudron’s skin is thick and tough like rock. But when it goes underground or when it touches lava, its body heats up, making its skin softer and more susceptible to damage. Softened body parts will glow red hot for a while and slowly revert back to its tough state when Magma Almudron stays out of magma for some time.

Some of its parts’ toughness change depending on whether or not they are heated. Its head and foreleg takes slightly more damage when they are heated, while its hindlegs become greatly susceptible to damage and becomes a weak point when heated. These parts stay heated regardless if they touch or get submerged in water.

Magma Almudron shares most of its attacks with the common Almudron with some minor changes. Listed below are the most notable moves in its move set.

How to Beat Magma Almudron in Monster Hunter Rise Sunbreak

Magma Almudron has two phases: normal and rage state. Both phases can also have different damage thresholds depending on whether or not Magma Almudron is heated.

Magma Almudron will usually appear walking around or swimming when traveling to a different area. In this phase, it will mostly be using its tail to attack while mixing in some claw swings and pounds.

This phase starts when Magma Almudron does its Heat Up attack and grabs a mud lava ball with its tail. Its tail attacks will then be upgraded, which usually spawn lava pools. It will also start going underground more often and stay heated for the rest of the phase until it gets knocked out of it and becomes unheated.

Hunters will have to be cautious with its Magma Explosion attack and be aware about its second larger explosion. Some of the boulders that it can spawn can appear like the regular ones that Almudron spawns, but they will eventually glow red hot and explode.

The Magmadron Armor Set can be crafted with the following:

The Magma Almudron Layered Armor Set can be crafted with the following:

Check out this video by Boss Fight Database showing a hunt against a Magma Almudron: