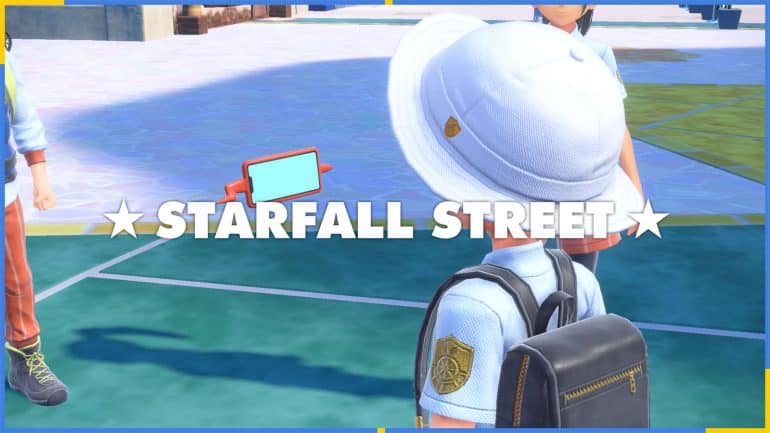 Starfall Street is one of the three story paths that can be taken in Pokémon Scarlet and Violet. In this path, players are tasked to go after and defeat the Team Star Bosses that have established their bases in different parts of Paldea. Not only that, since these are students of the Academy, players will also have to investigate the reason behind their insurgency.

In this guide, we will talk about the Starfall Street path, its leaders and their respective Pokémon rosters for both the initial run and rematches.

How to start the Starfall Street path?

During your first days in the Academy, you will receive a call from a mysterious individual who refers to themselves as Cassiopeia who will then invistes you to join Operation Starfall and gives you a task to go into the five Team Star squads’ bases and defeat the boss in each of them.

To complete the Starfall Street path, you must defeat all five Team Star bosses that are within their own bases. You’ll be accompanied by Clive, who is Director Clavell in disguise, along the way as he does his own investigation behind the Team Star’s motives. Penny will also show up from time to time to give you your rewards for defeating a boss.

Once all five bosses have been defeated, you will then be called upon by Director Clavell who drops his Clive disguise and “reveals” that he’s Cassiopeia who is behind the Operation Starfall. Upon defeating Director Clavell, he tells the truth that he’s not Cassiopeia and that he just assumed the role while knowing who the real Cassiopeia is.

It turns out that the real Cassiopeia was Penny all along. She decided to form Operation Starfall to save her friends, the Team Star bosses, and take all the blame from the incident that caused it all. Penny then challenges you to a final fight. Winning this fight will then complete the Starfall path.

Completing the Starfall Path is necessary to be able to progress to the final part of the game, along with the other two paths.

How to Defeat a Team Star Base

Each Team Star base is defended by a bunch of other students who have joined the team. In order to defeat a base, you must first go through the base’s first defenses by defeating 30 Pokémon within 10 minutes.

The first three Pokémon in your party are the ones that you can use and the fights will be done via the Let’s Go feature, so as long as your Pokémon are relatively stronger than the ones they are facing, then going through the base should not be much of a challenge. There are vending machines along the way that serve refreshments that can heal your Pokémon in case they are low on health or have fainted.

Once you have defeated enough Pokémon in time, you can then fight the boss of the base. Depending on the difficulty of the boss you’re facing, they can send out 1 to 4 Pokémon plus their own Starmobile to fight. These Starmobiles are vehicles powered by a Revavroom and a couple of Varooms, but despite that, the Starmobiles are their own entities and they have their own moves that follow the same type that their respective bosses specialize on.

Defeating the boss will reward you with the team’s badge. After completing the Starfall Team path, you can then do a rematch against these bosses who have stronger teams once per day. Winning in rematches will still reward you with Pokédollars.

Listed below are all the bosses of Team Star. They can be challenged in any order, but the levels of their Pokémon team will remain the same. Included in the list are their respective lineups for their first match and rematches.

Giacomo is the leader of the Segin Squad and specializes in Dark types.

Mela is the leader of the Schedar Squad and specializes in Fire types.

Atticus is the leader of the Navi Squad and specializes in Poison types.

Ortega is the leader of the Ruchbah Squad and specializes in Fairy types.

Eri is the leader of the Caph squad and specializes in Fighting types.

Check out this video by Mixeli showing all the battles against the Team Star bosses: