A guide on how to complete Chapter 5 of Trek to Yomi. 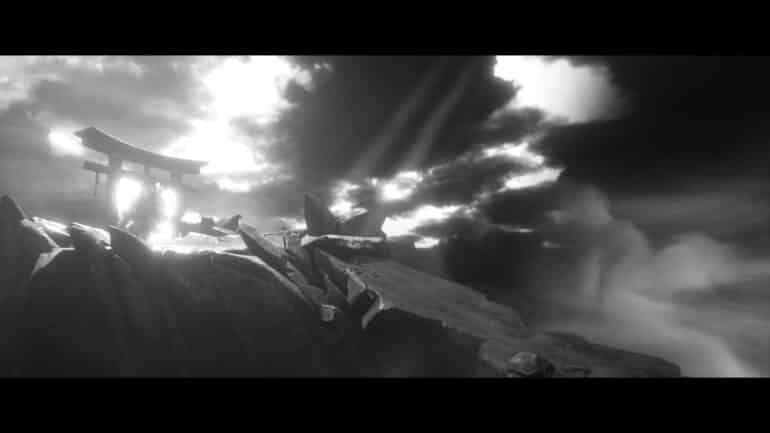 How to Complete Trek to Yomi Chapter 5

Hiroki finds himself in the Yomi where he has to go through its challenges to go back to the mortal world once more. The path through the Yomi is a straight one, however there are lots of spirits, wraiths, and other entities that will make the journey a difficult one.

Follow the path forwards and pick up the Great Thunder Artifact at the side of the path near the starting point. Once you have crossed the curled path that has straightened, up you will arrive at the first shrine of the chapter.

A little bit further away are some glowing symbols on the stones translating to “beginning”, “fire”, and “down” (from top to bottom). There is also a glowing tablet on the ground that shows a puzzle dial with three concentric circles. Turn the circles so that the symbols will all match the ones inscribes on the rocks.

Continue forward where you’ll enter a hall and the spirit of the first man Hiroki slew. Defeat him and proceed to the next area. Head towards the left side to get some ammunition and the Cleaving Thunder Artifact.

Continue moving to the right past the vista looking at the tall tower until you arrive in front of a gate. Before entering, check on top of the crates to the right to get a Stamina Upgrade. Inside the gate is the next shrine. Follow the path down to a couple of ledges where you will encounter two spirits. Defeat them and continue moving forward.

You’ll encounter more spirits along the way and then you’ll face against your first specter. You can block its flying swords easily and the close combat is similar to previous enemies. After defeating it, you will learn the Light Long Combination.

You’ll then enter a ruined building. Head tot he room up north to get an Ozutsu Capacity Upgrade. Continue moving to the right where you will gave to face more spirits and specters. The journey towards the next shrine is far away, so make sure to learn how to heal through perfect parries and finishing strikes when needed.

Once you’re at the end, use the shrine and head into the next gate. In here, you will fight against the wraith who will summon other spirits to fight for her, after the third wave, you can hit her and dispel her aura so that she becomes vulnerable. Try to fight near her so that you don’t have to run across the map. You can also just rush to her and hit her a couple of times before she summons spirits. After the wraith is defeated, you will learn the Anti-Armor Rotation Combination.

Continue moving to the right and defeat the other spirits. Then, head into the house and move to the right to defeat an armored spirit and reach the next shrine. You can also get the Ozutsu Capacity Upgrade from the table.

Head back to the entrance and go to the north room. Fight the ambushing spirits to proceed. As you exit the house, you’ll find the next shrine. You’ll then see another set of symbols with one obscured by a movable cart. These translate to “river”, “earth”, and “cut” (from left to right). You’ll then have to move to the tablet and rotate the pieces again so that the symbols match arranged from left to right to top to bottom. Solving this will reconstruct the statue and clear the path to the stairs. (Go to the back of the rightmost statue to see a Stamina Upgrade)

Climb the stairs to encounter another batch of spirits and a wraith. After defeating them proceed forward, but check the crates first to get the Earth Thunder Artifact before heading down the stairs. Continue going through the path as you clear it from spirits until you reach the palace door.

Enter the palace and on the left side of the hall is a shrine you can use. Head further into the main hall, but immediately retreat as soon as the walls start moving. At the entrance of this hall to the left is another passageway that opens up. Enter through this path and you’ll encounter a shade. This enemy can teleport behind you, so time your Heavy Stun to easily eliminate it. It will give you a Bo-Shuriken Capacity Upgrade.

Continue moving to the left to another hallway. Go towards the pedestal and interact with it. Immediately run back as the walls move in. Go to the left side where a new passageway appears to reach the next shrine. Head next to the other side of the room and defeat the spirits that appear. You’ll then arrive at a junction. Head to the path up north to get a Bo-Shuriken Capacity Upgrade.

Go to the right path and eliminate the enemies that appear. Continue moving to the right and the path up north opens up. Before heading there, move to the right side to get ammunition and the Black Thunder Artifact. Enter the path to the north. At the junction, head to the left first to get a Stamina Upgrade, then to the right.

You’ll then arrive at a shrine room with a shrine nearby. Climb up the stairs and head to the right path to get the Couchant Thunder Artifact. Head back and go up the other flight of stairs. Go towards the center platform and face the spirit of Sadatame once more. Similar to the first fight, he will sit back and have other spirits fight for him once his health reaches half. Once he’s defeated, you will learn the Block Ignoring Combination.

Head towards the right path to find the next shrine, as well as the Roaring Thunder Artifact. Go outside and cross the bridge where you will find another shrine. Continue moving to the left as you encounter more spirits. After that, you’ll reach another shrine. Head up towards the north path to get a Health Upgrade.

Back to the main route, head to the left and prepare to fight against mounted spirits. Similar to the mounted bandits, hit them three times to defeat them. There will be three mounted spirits that will patrol the area. Cross the desert afterwards to reach the next shrine.

Continue moving to the left and you will encounter more spirits and a wraith. You will then slide down and end up down a canal. Cut the rope attached to the boat and then press on the button on the side of the canal. Then, press on the button and ride the boat as the water rises. Go to the shrine afterwards.

Follow the path through the jungle ruins as you slay enemies and you’ll reach another shrine. Enter the cave beside the shrine to get a Health Upgrade. Exit the cave and go up the stairs to arrive at another symbol puzzle. There are another set of symbols translating to “body”, “enter”, and “direction” (from top to bottom). Match these symbols once more on the tablet and the tower will be rebuilt.

Go to the pressure plat on the far side of the area to rebuild the missing floor. Then, run towards the far right side to get the Young Thunder Artifact. There is another pressure plate in the same area in case the floor crumbles again. Head down the stairs on the other side to reach the next shrine. Then, head to the left side to get a Quiver Capacity Upgrade.

Continue moving to the right path, defeat the spirits, and then climb the long flights of stairs. Before climbing the last one to the top temple, check on the left side to get the Fire Thunder Artifact. Once you have collected every artifact, a new artifact will appear which is the complete statue of a Raijin.

Continue up the temple and to the right path while defeating the spirits. Climb up the ledge at the end of the path and head towards the left path to see another shrine and a Stamina Upgrade. Move towards the right path and through the enemies until you reach the base of the peak where the torii lies. In here, there are a couple of ammunitions that you can pick up to restock. There’s another shrine just up ahead and another boss fight to clear.

Shadow Sanjuro 5 has main attacks and one non-damaging move:

Tips on how to defeat Shadow Sanjuro

After defeating Shadow Sanjuro, you’ll be once again given a chance to respond using these three choices:

These choices are connected to the ending, but they will not affect what ending you will get just yet. The ending will depend on what your choice will be after the final boss fight in Chapter 6.