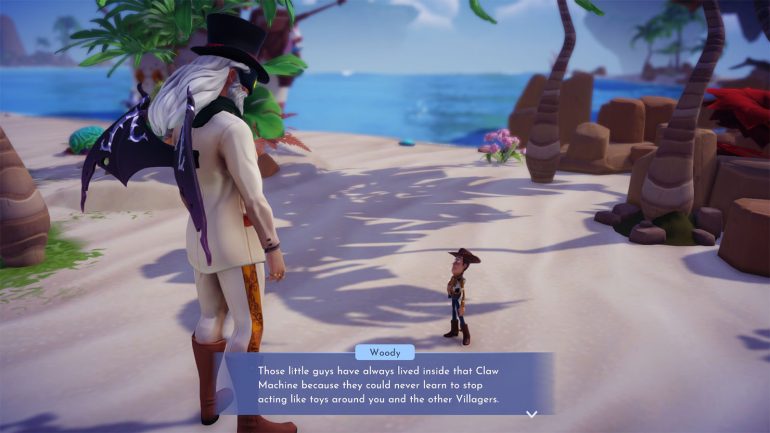 Wanted: Aliens is the second friendship quest from Woody in Disney Dreamlight Valley. In this quest, Woody is in search of all his Alien friends who have gone missing after the Claw Machine broke.

Read on, and this guide will go through all the steps on how to complete the Wanted: Aliens quest in Disney Dreamlight Valley.

How to Complete the Wanted: Aliens Quest

After reaching friendship level 7 with Woody, talk to him to start the Wanted: Aliens quest. You also need to have progressed your friendship with Scar in order to be able to enter his Cave which will be needed in the quest. Follow these steps to complete the quest:

Step 1: Gather the materials for the new Claw Machine

Woody will give you some of the old Claw Machine’s parts. You’ll then need to gather the following materials needed to fix the Claw Machine:

Once you have all the materials, head over to a crafting station to craft the new Claw Machine.

Step 3: Meet with Woody inside the Carousel and bring the Claw Machine to him

Head inside the Carousel and then give the Claw Machine back to Woody. He will then ask for your help in locating the Aliens.

Go to Buzz and he will tell you the locations of where the Aliens have landed.

Step 5: Find the Alien Toys and give them to Woody

You then have to go to the locations where Buzz have seen the Aliens:

Once you’ve gathered all of them, go back to Woody and give him his Alien friends back to complete the quest.

After completing the quest, you can then continue working on leveling up your friendship level with Woody.

If you like this guide, be sure to check out our other Disney Dreamlight valley articles:

Also watch this video by Doubtfire showing how to complete the Wanted: Aliens quest: