A Plague Tale Requiem Walkthrough Chapter 8: A Sea of Promises 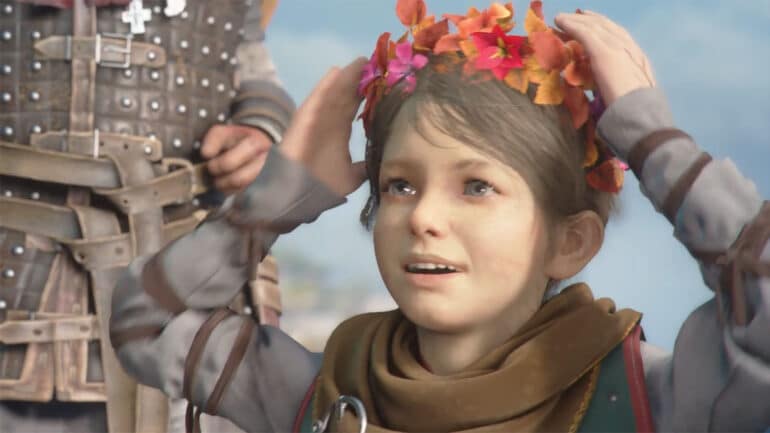 A Sea of Promises is the eighth chapter in A Plague Tale: Requiem that follows the journey of the de Rune siblings towards La Cuna with the help of Arnaud and Sophia. Upon arriving in the island, the siblings immediately start looking for the mysterious place that Hugo sees in his dream in the hopes that they finally get a cure to the Macula.

In this guide, we will go through the walkthrough of chapter 8: A Sea of Promises, of A Plague Tale Requiem, showing some tips, tricks, or solutions on how to complete the chapter.

A Plague Tale: Requiem Chapter 8: A Sea of Promises starts off with the group sailing through the seas on Sophia’s boat heading towards La Cuna, the island that Arnaud said matches the one in Hugo’s dream.

Talk to the others

As you take control of Amicia, you can explore the interactable stuff within the ship. You can then talk to Arnaud to know more about his shield, afterwards Sophia will ask you two to set the sails for her. Then, you can talk to Sophia and she will let you control the ship for a bit. Hugo will then call out as he sees La Cuna in the distance. Sophia then tells you to talk to her once you’re ready to dock the ship.

Explore the boat with Hugo

You can then take Hugo around the ship for a while to talk about all the other stuff inside. There are no collectibles at this point yet.

Talk to Sophia to dock

Go to Sophia and talk to her to initiate the scene of the arrival to La Cuna.

As you reach the island, you’ll be welcomed by a villager into the village which is celebrating a festival. Move through the path and Arnaud will ask some details about Hugo’s dream to help look for the island.

Look around for information about the island

As you arrive in the market, turn right and go through the path to reach the goat pen. Talk to Hugo and it will unlock the Silent Lucinda souvenir.

Head back to the market and talk to the spice vendor, the vegetable vendor, and the fabric vendor to gather information about the island.

Go to the path to the left and talk to the lady that is talking to a crowd. Go to the path behind her to unlock the Black Kite feather collectible.

Go back to the market and you’ll see that the blocked path to the right will now open up.

Follow the path up and turn left down the stairs to play the mini game. Completing the mini game ill unlock the Flower crown souvenir. Getting all the pots through the hoops perfectly will earn you the Perfect Throw trophy.

Head back up the main path and turn left to proceed.

You’ll arrive at another location where you’ll see the parade just as it passes by. You can then check out the dancers ahead, then go towards the balcony at the left side. Talk to Hugo and the lady beside him will allow him to throw the flowers at the parade.

Afterwards, follow the path around the dancers to arrive at the end of the parade.

As the crowd is waiting for the “Mother”, the Count then talks in place to accommodate the villagers. Arnaud sees him and tells Hugo to enact the part of his deal which is to set the rats towards the Count. Amicia intervenes and the Count and Arnaud proceed to fight. Soldiers will then pursue the siblings through the streets.

Escape from the Count’s soldiers

A short chase then happens. Weave through the streets of the village while avoiding the soldiers along the way. You will eventually reach a house where you can find refuge for a moment.

After a short talk between the siblings, they decide to fight back.

As you head out of the house, you will arrive at a stable. Check the right side to find a workbench and a chest. Then check the door to the left.

The door will be locked, so have Hugo slip through the hole and unlock it from the other side. Inside is a cart and a chest at the back. Bring the cart over to the side of the stable and use it to climb up.

Check the space behind the wall first to find a chest, then turn around and go to the opening to proceed.

You will then be spotted by a falconeer soldier who uses a falcon to attack. The falcon swoops down towards your direction or towards where sound is. So, in order to get through, you will have to move behind cover to avoid its attacks; time your movement right as the falcon sweeps by. You can also use the tool chest as a distraction to lure the falcon away and get a better window.

Make your way towards the stairs to the left where you’ll find a door.

You will arrive at a stage where Arnaud and the Count are fighting. Amicia decides to interfere and stop Arnaud by pulling the rope and hitting Arnaud with a pole. Arnaud then gets captured by the guards.

As the Count is about to confront the siblings, he is stopped by Emilie, the Countess and known as the Mother. She then invites the siblings over to their castle for dinner.

You arrive to the castle and the Countess invites you inside. She asks you to try out the dates, to which the siblings agrees. You then follow her through the courtyard and arrive at an altar with a bird on top of a child, which Hugo recognizes as the same bird in his dreams. The siblings talk for a moment before they rejoin the Countess.

She then shows the siblings their room for the night and the chapter ends.

Here are the trophies that can be obtained in Chapter 8:

Also check out this gameplay video by Happy for A Plague Tale: Requiem PC – CHAPTER 8 – A SEA OF PROMISES: