A guide on how to defeat Aurora Somnacanth in Monster Hunter Rise: Sunbreak. 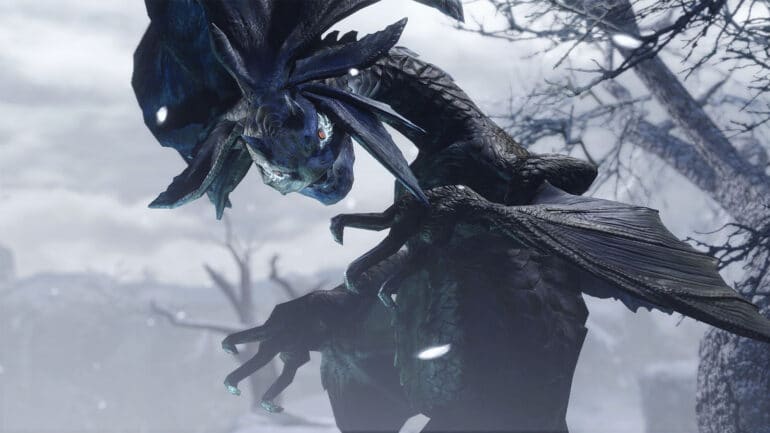 Aurora Somnacanth is one of the new subspecies introduced in Monster Hunter Rise: Sunbreak. Instead of breathing out sleeping gas, it now breathes out freezing air when it has adapted to living in the colder regions. Though it cannot freeze a hunter fully, getting hit by one of its icy attacks can be fatal.

In this guide, we will talk about Aurora Somnacanth and share some tips on how to make the hunt for it more manageable.

Aurora Somnacanth is a leviathan and is a subspecies of the Somnacanth. It has developed to breathe out freezing air in comparison to the common Somnacanth that breathes out sleeping gas.

Most of an Aurora Somnacanth’s physical features remain the same compared to the common Somnacanth except for its color. It has taken a more pale yellow color for its body and pale blue for its fins and crest.

It no longer picks up giant glams as part of its moves and attacks as most of it has been replaced with frost attacks.

Aurora Somnacanth is extremely weak against the fire element and will also take significant damage against the thunder element and blast ailment. Its weak point is its neck followed by its head, however this can be hard to reach whenever Aurora Somnacanth is standing on its tail. Attacking it while it is lying on its backside or when it is toppled down are the best times to land hits on these weak points.

Aurora Somnacanth cannot be put to sleep, so it is better to use other ways to incapacitate it like traps or paralysis.

Aurora Somnacanth shares most of its attacks with the common Somnacanth with some minor changes. Listed below are the most notable moves in its move set.

How to Beat Aurora Somnacanth in Monster Hunter Rise Sunbreak

Aurora Somnacanth will usually start with its tail and body attacks at its first encounter, but it can start doing its icy moves as it transitions to its rage state.

Cold breath will start coming out of Aurora Somnacanth and its head fin will also start taking on a more vibrant blue color. In this state, it is more agile and it can string up multiple attacks in a short span of time.

Hunters will have to be careful not to get caught by its combo due to its relentlessness, plus they have to be mindful about their stamina levels especially when hit by iceblight. During this state, most of its attacks will include its icy powder, and it can do its signature Freezing Explosion attack.

The Auroracanth Armor Set can be crafted with the following:

The Aurora Somnacanth Layered Armor Set can be crafted with the following:

Check out this video by Boss Fight Database showing a hunt against an Aurora Somnacanth: