A guide on how to defeat Blood Orange Bishaten in Monster Hunter Rise: Sunbreak. 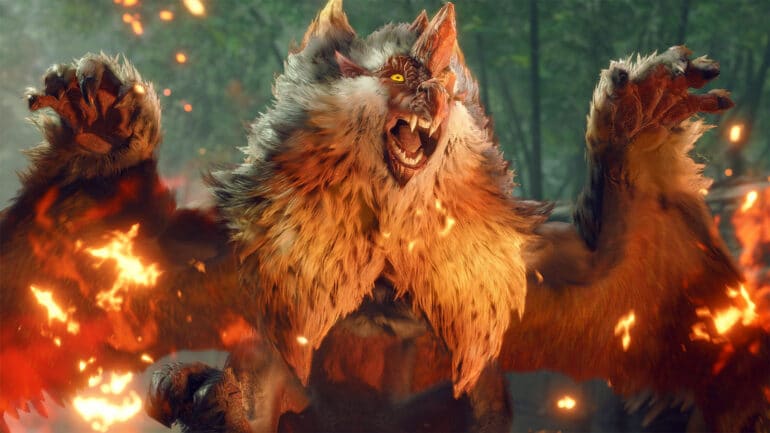 Blood Orange Bishaten is a new subspecies added with the Monster Hunter Rise: Sunbreak expansion. This variant is much more aggressive than the common Bishaten and has now adapted to use explosive pinecones instead of fruits as part of its arsenal against monsters and hunters.

In this guide, we will talk about Blood Orange Bishaten and share some tips on how to make the hunt for it more manageable.

Blood Orange Bishaten is a fanged beast and is a subspecies of the Bishaten. It has taken on an orange-brown colored fur and has ditched using fruits as projectiles and moved on to using explosive pinecones. They are so adept at using these pinecones that they can even turn them into tops that move in a circular path.

They have also learned how to breathe out fire, which they use to attack hunters or to ignite their pinecones. Proper caution should be observed when dealing with a Blood Orange Bishaten as it can easily be overwhelmed by the pinecones, especially when it fills the area full of them.

Blood Orange Bishaten is extremely weak against the water element and is also slightly susceptible to blast. Its tail is also a weakpoint and should be prioritized by all damage types. Hitting its tail while standing with it will make it topple down.

Keeping it grounded and incapacitated using traps while it’s on all fours is recommended so that its head will be open for hits.

Blood Orange Bishaten shares most of its attacks with the common Bishaten with some minor changes. Listed below are the most notable moves in its move set.

Blood Orange Bishaten will be attacking using its claws and tails, but it will also start using its pinecones as projectiles at hunters. As it transitions to its rage state, it will start standing on its tail more.

Blood Orange Bishaten will start becoming more aggressive and relentless with its attacks. It will start using its pinecone attacks strung back to back, along with its back flips. It can also start shooting out its fire breath and its pinecone barrage.

At this point, it will often be on its tail, so focus on the tail to topple it down and get free shots at its head. It’s not recommended to use Flash Bombs while it is on its tail due to this.

The Orangaten Armor Set can be crafted with the following:

The Blood Orange Bishaten Layered Armor Set can be crafted with the following:

Check out this video by Boss Fight Database showing a hunt against a Blood Orange Bishaten: