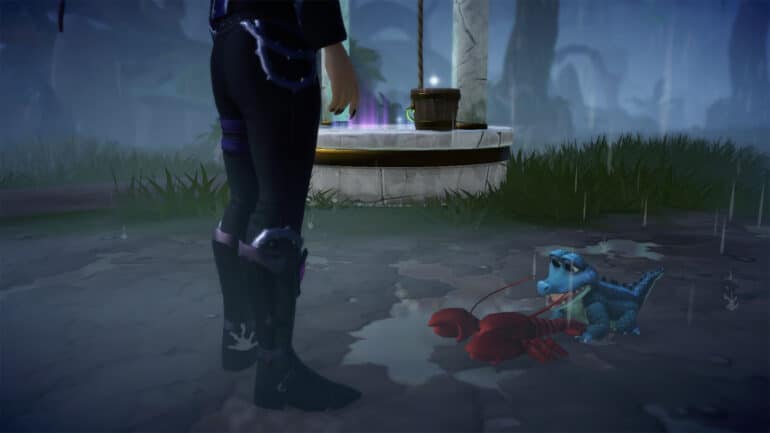 Crocodiles are one of the critters that can be befriended with in Disney Dreamlight Valley. These crocodiles are not as dangerous as the ones in real life and they like to play around once in a while. As with any other critters in the game, they can also be befriended and turned into a companion. The good news is that hands are not part of their diet.

In this guide, we will be talking about how to get the crocodile companions, along with how to approach them and what to feed them.

Where to find Crocodiles in Disney Dreamlight Valley

Crocodiles can be found roaming around the Glade of Trust. The Glade of Trust may be unlocked by spending 5,000 Dreamlight points. Usually, there would be 2 different crocodiles in the glade depending on the time of the day.

Just like other animals in Disney Dreamlight Valley, they usually bolt when they see you coming. If you encounter a crocodile, you must wait until it rests before approaching it with food. They have greater endurance than you, so you’ll have to chase them for a while before you catch up with them.

How to feed Crocodiles in Disney Dreamlight Valley

A crocodile’s favorite food is the Lobster, which can be caught in golden fishing spots in the Glade of Trust. They also eat Herring and Squid as these are two food items that they like, while they don’t want to eat any other food.

You can only feed each crocodile once per day. After feeding them a couple of times, they will then become one of your companions.

How to approach Crocodiles in Disney Dreamlight Valley

Some of the crocodiles that you’ll see are docile enough that you can approach them easily, while others tend to run away like they have the zoomies. To approach the running crocodiles, you will have to try to get close to them as if you are playing the game Red Light, Green Light.

How to easily tame a crocodile in Disney Dreamlight Valley:

We recommend to just tap the directional key or flick the analog stick to take a step forward. The time window between its head movements is just short, so it’s better to just inch your way towards the crocodile rather than risk spooking it away.

Only when they have stopped will you be given the option to Approach them, and if you take too long, the option will disappear and they will resume running. When you reach them, if you notice that they are retreating, you can go ahead by sprinting in the opposite way. This will allow you to catch up to them just in time to offer them the food they prefer when they halt.

How to get the Choco Crocodile in Disney Dreamlight Valley

As for the Choco Crocodile, it is a time-exclusive pet that can only be obtained if you have played the game during the first week of the early access, which lasted until September 13th, 2022. No info on whether it will become available again once the game is on full release, so let’s just cross our fingers on that for now.

From the Wardrobe menu, go to the Companions tab and select the Crocodile as the pet that you want to take out with you.

If you like this guide, be sure o check out our other Disney Dreamlight Valley articles:

Check out this video by AbdallahSmash026 showing details on how to get a crocodile companion: