God of War Ragnarok – The Eyes of Odin Favor Walkthrough 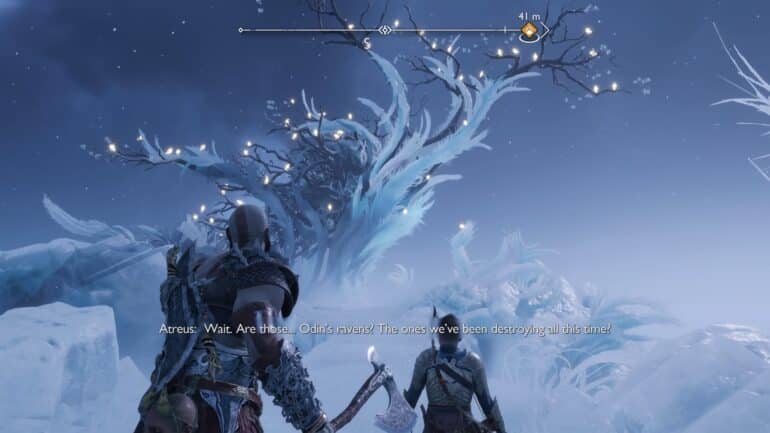 Odin’s ravens have returned again to spy for the All-Father in God of War: Ragnarok. What we didn’t know, however, is that these unfortunate souls are being used against their will. This truth is found out by us with a little help from the squirrel who tends to the world tree. And once we knew the truth, finding and destroying the spectral ravens became a priority.

In this guide, we’ll tell you where you can find and destroy all 48 ravens that are present in the game. We will tell you what the rewards for freeing them are, courtesy of the lost ones who reside in Niflheim.

Before we get to get to the locations, here are a few things to note:

These ravens are those you have access to after you return to Svartalheim with Brok to forge the Draupnir Spear.

These ravens are ones you can search for once you return from Vanaheim and have enchanted the chisel to write runes.

The following ravens are the ones you can seek out after returning to Vanaheim to help Freya defend her home.

This set of ravens is accessible after completing the Scent of Survival Favor and doing the For Vanaheim Favor.

Marking the ravens in Midgard is a little hard. The lake of the Nine is a large place where there are multiple points of interest to tackle in any order. Ordering the raven is kind of pointless.

The last two ravens only appear after progressing the story to the point where Ragnarok is avoidable.

You can claim the rewards once enough ravens have returned to the tree and a threshold has been cleared. There are 6 chests that you can open. Here are their rewards in order.

After opening all 6 chests, The Raven Keeper will challenge you to a fight in the arena.

There is nothing special about her other than a few voice lines and the ability summon Hel Walkers when her drops at certain points. She’s a powered up revenant by all measure.

What you should really watch out for is the Pale One. This dragon is summoned after you nearly defeat the Raven Keeper. It puts up a decent fight even against end-game equipment.

And your reward for beating defeating the Raven Keeper is:

And that’s if for this lenghty guide. Good luck in your hunt if you’re still looking for the ravens.

If you want know how we think about the game, read our review for God of War: Ragnarok. Also check out our other God of War Ragnarok guides and articles.

Watch this gameplay video by BabyZone where Odin Reveals How He lost His Eye in God Of War Ragnarok: