An age-old philosophical question parodied in High on Life. 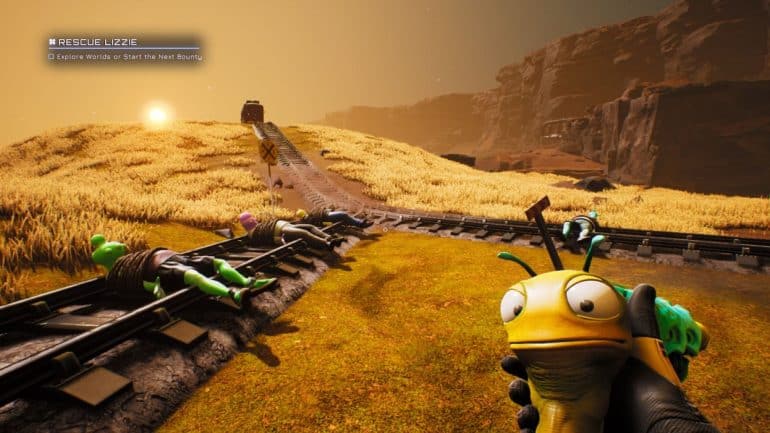 The High On Life Trolley Tracks disc gives you the age-old question of whether it’s moral to kill multiple lives or just one. Considering what game we’re talking about the philosophical concept is looked upon with a comedic whim. This guide will show you everything you need to know about the Trolley Tracks in High On Life.

How to Get the Trolley Tracks Warp Disc in High On Life?

Once you have the Trolley Tracks, you’ll be presented with the Trolley Problem. There are six aliens who are tied to the trolley tracks on a forked path. There is one alien who is tied alone on one path and there are five aliens tied to the other. The trolley is approaching and you have to decide who lives and dies.

There is a humorous twist as the aliens bicker on who should live, throwing out moral philosophical statements that really make you question on your decision. As to why you can’t just untie the aliens considering the trolley is rather slow is perplexing, but it does add to the amusement.

High On Life Trolley Tracks: Don’t Do Anything

If you don’t do anything, the trolley will run the five aliens on the more populated side of the trolley track fork. Here are each of their reactions:

In a strange twist of fate, the surviving alien later admits that he tied himself to the tracks because he had nothing better to do. Whether you think this was the right decision is up to you. You do kill a pregnant alien for this guy but you also killed another alien planning to commit genocide.

If you pull the lever, only one alien will die. He taunts you to watch him as he gets run over by the trolley. The other aliens are grateful that they don’t get to die.

Although only one alien dies by your decision, the second alien still wants to continue committing genocides. Though you’ll save more lives with this decision, you do have to wonder if more will be lost to your choices in the future.

That’s our guide for the High On Life Trolley Tracks. We hope this article was helpful in showing you both choices that this warp disc has for you Here are some more High On Life content:

Check out this Youtube video from CHEEBnRUN showing you the High on Life Trolley Tracks.