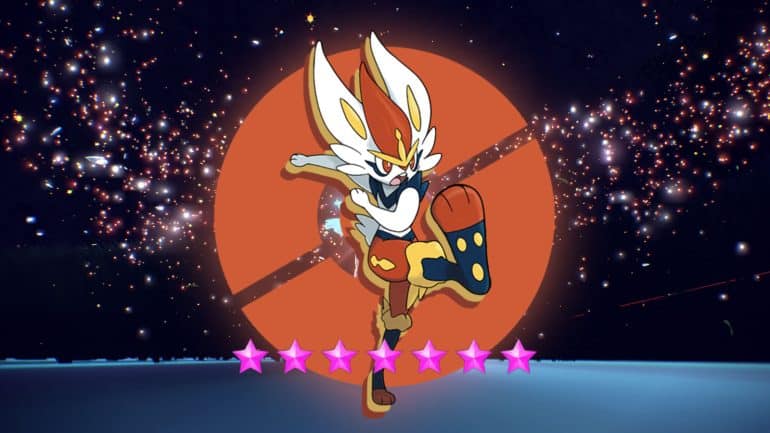 Cinderace will be coming to Pokémon Scarlet and Violet through a special Tera Raid event where players can encounter the Pokémon in its powered up 7-Star Tera form. Like the previous 7-Star Charizard, this Cinderace will be testing out trainers’ skills and builds to see which ones can defeat it in battle.

In this guide, we will be talking about the 7-Star Cinderace Tera Raid Battle Event, as well as talk about what Cinderace’s strengths and weaknesses are, and share some Pokémon builds that can help get through the battle.

Being rated at a 7-Star Tera Pokémon, Cinderace will be at level 100 with all of its stats at perfect IV, with its Speed stat at a possible maximum 370 points. It will be using the Fighting Tera power all throughout the fight.

Cinderace has the following moves for this encounter:

Cinderace will always do a Bulk Up on its first turn.

It can remember the other moves that it can naturally learn through leveling up, including its other signature move, Court Change.

Cinderace has its Libero hidden ability. Although, the effects of Libero will not be triggered during the raid.

Listed below are just some of the Pokémon that can be an effective counter to defeat 7-Star Cinderace.

Slowbro has good immunity against 3 out of 4 of Cinderace’s attacks excluding Acrobatics, but the tanky build plus its Slack Off can help sustain itself through the attacks. As a debuffer support, attack with Chilling Water then Psychic, then switch to terastallized Chilling Water for some decent chip damage while keeping Cinderace’s attack debuffed. Yawn and Psychic can be swapped with Nasty Plot and Stored Power respectively, as long as your entire party can hold up while you’re charging.

Azumarill will be resistant to Fighting moves, but may struggle recovering once pelted with Iron Head. Best used with a dedicated healer support, plus another attacker.

If you managed to get the 7-Star Charizard, then you can switch up its Tera type to Flying to be resistant against Fighting attacks and get STAB damage for Flying attacks. Have it hold a Sitrus Berry that will get consumed after a Belly Drum, making its Acrobatics deal 4x damage to Cinderace.

Dragonite works best if there’s a support in the team that keeps its health topped up for Multiscale to proc, otherwise Roost can help heal up. Perform a Rain Dance first to increase the damage done by Hurricane.

Depending on the composition of your team, you may want to put up Reflect first, then either Calm Mind or Fake Tears. Finish up with a Hyper Beam and be prepared to tank the next turn or have someone cheer to heal.

Flutter Mane will be relatively safe against the Fighting type move while still be effective with its Fairy type moves. An Expert Belt or Booster Energy can be used for an all-out offensive build. Playing as a debuffer will work best with this build.