A guide on how to defeat Pyre Rakna-Kadaki in Monster Hunter Rise: Sunbreak. 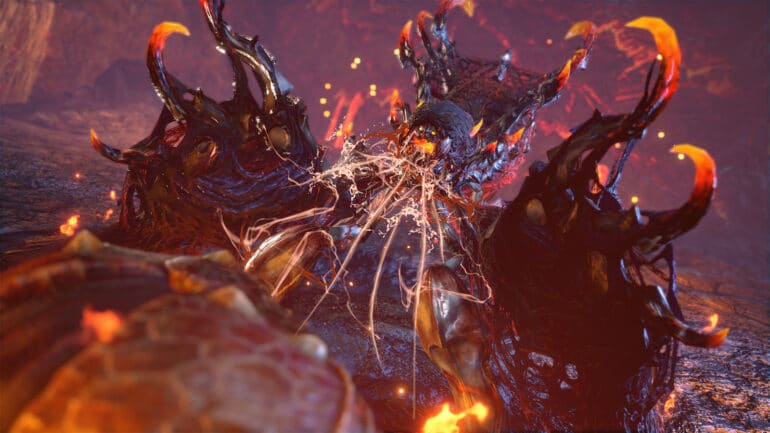 In this guide, we will talk about Pyre Rakna-Kadaki and share some tips on how to make the hunt for it more manageable.

Pyre Rakna-Kadaki is a temnoceran and a subspecies of the Rakna-Kadaki. It usually found in the volcanic region and thus has taken in more elements from its surroundings. Because of this, it has incorporated the blast element to its attacks,

Along with its introduction come the Pyrantula which is the Pyre Rakna-Kadaki’s younglings. They are similar to the Rachnoid, but have also taken in the blast element. They tend to follow hunters around when they’re not attached to their mother, and when they come close, they either shoot out flames or explode and cause blastblight.

Pyre Rakna-Kadaki can still use the Pyrantula as a way to latch on to the ground to use them as hooks to move around an area. Their silk has also become more durable enough to handle the heat that it can sometimes be used as a wick to lead fireballs towards the Pyrantula.

Pyre Rakna-Kadaki is extremely weak to the water element, followed by the ice element. Its head is its weakest point and because of that, it is also susceptible to getting stunned. However, its claws are almost always in the way, so windows to hit the head can be quite slim.

Another option is to go for its leg threads which break easily and make Pyre Rakna-Kadaki stagger or trip. It can rebind silk onto its legs but it won’t heal any of its health.

Pyre Rakna-Kadaki retains some of its moves from Rakna-Kadaki with some minor changes. Listed below are the most notable moves in its move set.

How to Beat Pyre Rakna-Kadaki in Monster Hunter Rise Sunbreak

Pyre Rakna-Kadaki will mostly be using its Pyrantulas to move around and reposition. It will also be using its claws and its abdomen for attacks.

Once it enters its rage state, Pyre Rakna-Kadaki’s mouth will start emitting fire. It will now transition into using more of its fire attacks such as the Flame Thrower and the Pyrantula Bombs. Attacking it at its legs at this point will prevent it from attacking as much. Destroying its webbed abdomen will also help topple it down and reduce the damage of its abdomen attacks.

The Pyre-Kadaki Armor Set can be crafted with the following:

The Pyre Rakna-Kadaki Layered Armor Set can be crafted with the following:

Check out this video by Boss Fight Database showing a hunt against a Pyre Rakna-Kadaki: