A guide on how to defeat Shagaru Magala in Monster Hunter Rise: Sunbreak. 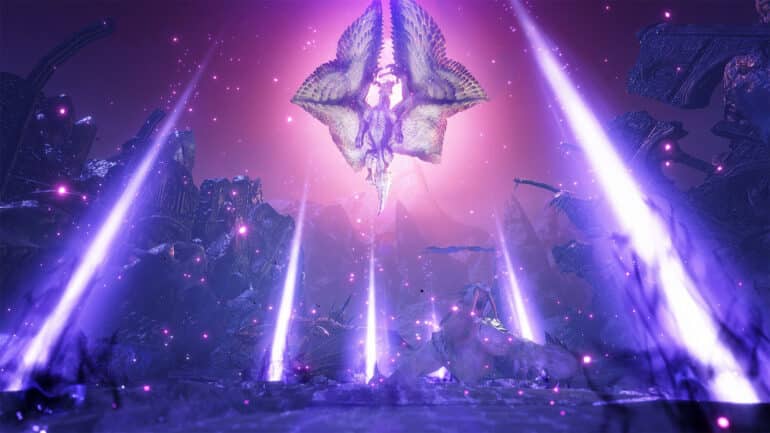 In this guide, we will talk about Shagaru Magala and share some tips on how to make the hunt for it more manageable.

Shagaru Magala is an Elder Dragon and is the adult form of Gore Magala. It has shed its black scales, revealing its shimmering white scales underneath. It still kept most of its physical features from its juvenile form except for the wings that have a more defined shape when spread out, and it now has developed eyes. Its antenna have also turned into proper horns that are constantly flared up. It no longer folds its wingarms, but rather constantly uses them to stand up.

Its also has grown more aggressive and can be compared to a Gore Magala that is constantly in a frenzied state. The Frenzy that its spreads is now more potent than before and it can cover a lot more ground. It can also leave several pools of Frenzy on the ground, which eventually explode.

Achieving its final form and obtaining the Elder Dragon status, Shagaru Magala is now weaker against the Dragon Element. Both cutting and impact damage deal the same amount of damage to its body parts, save for its head which is more susceptible to cutting damage. Its wingclaws are tough when it’s on its normal state, but they take more damage during its rage state.

Since it now has developed eyes, Shagaru Magala can be staggered by a Flash Bomb, but it can no longer be affected by traps. It

Shagaru Magala has several moves and most of its attacks can inflict the Frenzy ailment. Listed below are the most notable moves in its move set.

How to Beat Shagaru Magala in Monster Hunter Rise Sunbreak

Shagaru Magala in its normal state is as dangerous as a frenzied Gore Magala, so everyone should still be cautious around it. It can already use frenzy attacks often and it can also attack with its wingarms.

Once Shagaru Magala enters its frenzied state, it will start releasing the frenzy virus from its body. This means that just by getting close to it is enough to get infected by the virus. It gets more aggressive and its attacks hit harder than before. There will also be explosions of the frenzy virus from random spots on the ground.

Breaking its horns will no longer take it out of its frenzied state, but Shagaru Magala will still topple down during both breaks, providing an opening for attacks.

During this phase, its wingclaws become more pronounced, but they also become more susceptible to damage, so you and your party can also concentrate your attacks on them.

The Monster Hunter Rise Sunbreak Arc/Storge Armor Sets are Rarity Level 9 Master Rank Armor Sets. Both Arc and Storge have the same exact stats, skills, and crafting materials; the difference is with the design and that Arc is for male characters while Storge is for female characters.

The Arc/Storge Armor Set can be crafted with the following:

The Shagaru Magala (Arc/Storge) Layered Armor Set can be crafted with the following:

Check out this video by Boss Fight Database showing a hunt against a Shagaru Magala: