The sworn for of the Mushroom Kingdom knows how to dominate the soccer field. Learn the best Gear and team composition for Bowser in Mario Strikers: Battle League. 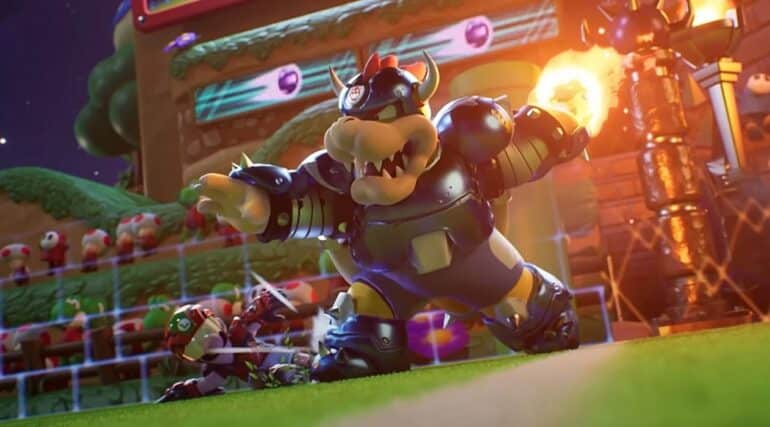 Bowser has high Shooting and Strength stats which makes him great for pushing past enemies and making shots. This best Bowser build for Mario Strikers is meant to emphasize on his ability to defend from attackers and make long range shots. With the Gear we recommend playing Bowser as an aggressive defensive player that puts a stop to any offensive attempts from enemies.

While Bowser doesn’t really have impressive Speed, his high Strength stat thanks to this build more than makes up for that. If you want to make long ranged scores with Bowser, very few can stop him on his tracks.

Bowser can make for a great offensive player, but there are others out there who can do this job better. Both Rosalina and Bowser have high Strength stat, but players are better off letting Rosalina in the offensive with her better Technique stat. Luigi and Yoshi are great for support and alternative scorers should you need them to.

This team composition has incredibly great offensive potential which compliments the defensive Bowser build above. Rosalina can push through the opposing team’s defenses with Luigi and Yoshi’s support while Bowser can defend your goal and attempt any long range shots whenever the opportunity provides.

How to Play Bowser in Mario Strikers: Battle League

The best way to play Bowser is by putting him as your main defensive player. His high Strength stat means that he can pretty much put a stop to the opposing team’s advances and allows him to tackle any attempting to do a Hyper Strike. Bowser also has a good Shooting stat which makes him great for long distance shots without needing to get near the enemy team’s goalpost.

Due to his low Passing and Speed stats, Bowser isn’t suited for support. His high Strength stat makes him great for offensive rushes, but we recommend letting him stay within your side of the field to defend against enemy players. Let teammates like Rosalina or Mario take the role of your primary scorer.

Bowser has one of the highest Strength and Shooting stats even without any Gear. But he also has low Technique and Passing to make up for it. Bowser is great as a defender and scorer, with his high Strength allowing him to stop any who would dare get in his way.

We recommend prioritizing building up on his Strength and Shooting rather than balancing his stats. Let the teammates of Bowser handle his shortcomings as you’re better off with a specialized team.

We hope you learned how to create the best Bowser build in Mario Strikers: Battle League using our guide. Don’t go just yet, because we have more on Mario Strikers.

Check out the new Bowser animations in this Youtube video from EnigMind.