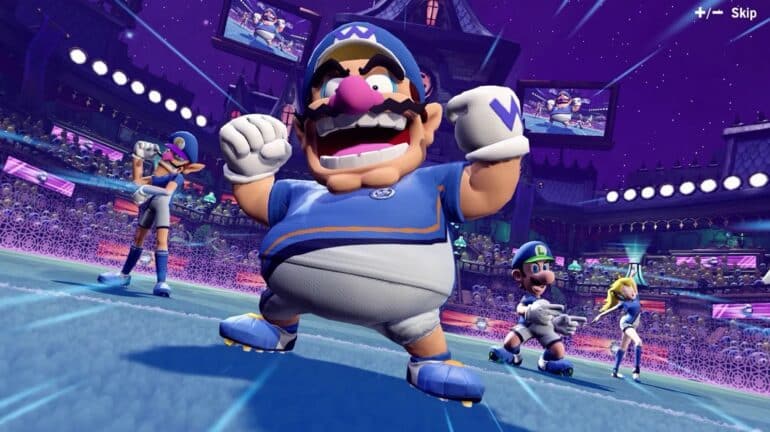 Wario has a high Strength and high Shooting stats. He can easily rival Rosalina in terms of being an offensive scorer for your team. The build we have above maximizes his offensive potential allowing him to bruise through enemy team formations. He’ll be able to tackle anyone attempting to do a Hyper Strike.

With this build, players do have to compete with the fact that Wario has below average stats in Technique. Wario will have to leave those fancy trick shots to his teammates but he can brute force his way through the game.

This team composition prioritizes offensive strategies as you’ll have no problem keeping the ball moving around. Wario, Toad, and Yoshi are all reliable scorers that can get past the enemy team’s defenses pretty easily. Wario would have to play both an offensive role and defensive as both Bowser and him have great defensive potential thanks to their high Strength stat.

How to Play Wario in Mario Strikers: Battle League

The best way to play Wario in Mario Strikers: Battle League is to place him in a flexible offensive role. With his high Strength stat, Mario can put a stop to anyone trying to score a goal and his high Shooting stat means that he can reliably take shots without having to rely on anything fancy.

Wario had mediocre Speed and Technique which makes it a challenge to fight against speedy players. You can create a build that balances his stats out via Gear but we recommend making a team composition that makes up for his shortcomings instead.

Wario has high Strength and Shooting stats even without Gear, but his Technique and Speed leave much to be desired. While Wario can make for a great defensive player with his tackles, he can easily be outmaneuvered by faster teams. Wario is more suited for playing offensively since his high Shooting stat allows him to make shots without having to worry too much.

Players will be better off teaming Wario up with Toad or Yoshi who have high Speed and Passing allowing them to compensate for Wario. It’s also best to leave a different defender like Waluigi behind due to his high speed and long arms making it easier to defend.

We hope you learned how to create the best Wario build in Mario Strikers: Battle League using our guide. Don’t go just yet, because we have more on Mario Strikers.