Yoshi is a great offensive support player. Learn the best gear and team composition for Yoshi. 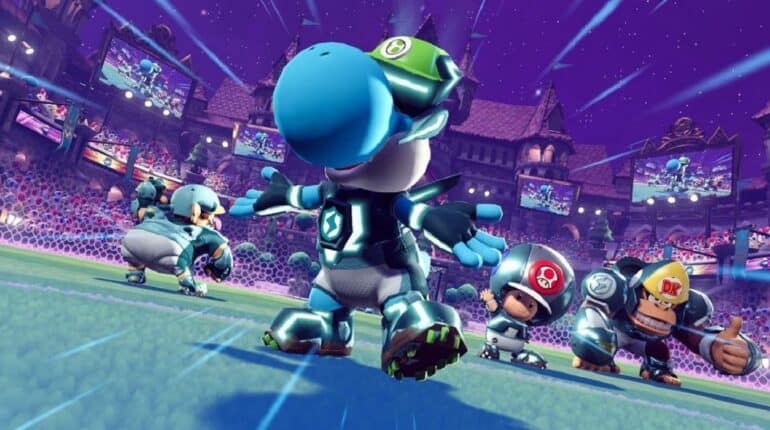 Yoshi is fast, can shoot well, and can coordinate with any team effectively. But due to his inherently mediocre Strength and Technique, others should often fulfill the role of your primary scorers than Yoshi. The build we recommended will turn Yoshi into a fast-paced scorer that’s a great offensive support for his team.

Yoshi has a high Passing stat that allows him to coordinate with his team very effectively. Although he shouldn’t be your primary scorer, his position is very important for this team composition to work. Rosalina has high Strength and Scoring stats which makes her a great teammate for Yoshi who can easily pass the ball to anyone.

This team composition is very good for making quick scores. Peach has one of the best Hyper Strikes in Mario Strike: Battle League so using Yoshi for item collection is a good way to give support. Bowser has high Strength and is capable of making long ranged shots.

How to Play Yoshi in Mario Strikers: Battle League

The best way to play Yoshi is by placing him as an offensive-support. With the build we made above, Yoshi still capable of making goals however players should prioritize his ability to quickly get around and pass the ball to teammates.

Yoshi is great for playing a lot of roles. He can be a quick scorer, speedy item collector, or great passer. With his stats, Yoshi can function in any team composition wonderfully. However other characters, such as Rosalina and Mario, can fulfill a more offensive role better than Yoshi.

Yoshi has superior Shooting and Passing stats without Gear, but his Technique is below average making it challenging to use his Hyper Strike. His Strength and Speed are also mediocre but with our best Yoshi build in Mario Strikers above, we can easily turn him into a fast scorer with a great Passing stat.

We recommend not investing in his Technique as it really won’t pay off that much. Instead, have Peach accompany him to use hers. Prioritize Gear that will give Yoshi more Speed and Passing instead. This will make Yoshi better for team coordination.

We hope you learned how to create the best Yoshi build in Mario Strikers: Battle League using our guide. Don’t go just yet, because we have more on Mario Strikers.