Rosalina is one of the strongest scorers in the game. Learn the best gear and team composition for her. 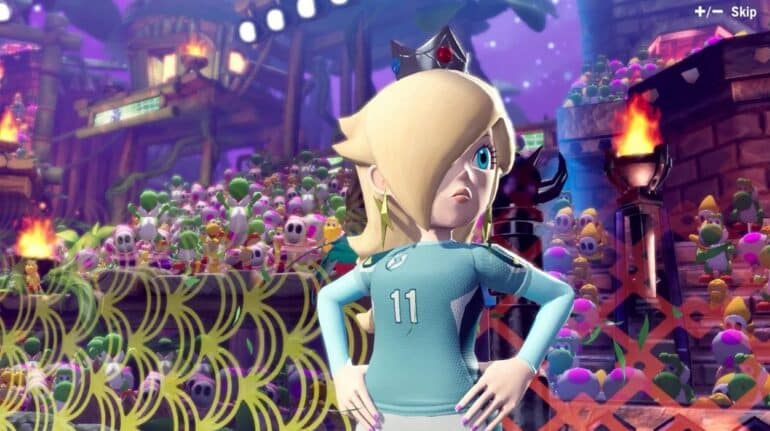 Rosalina acts best as a bruising offensive player and this build maximizes how ruthless she is as your main scorer. With high Scoring and Strength stat, Rosalina can brute force her way through any enemy team’s strategy or formation. Even without Hyper Strikes, Rosalina is an active threat against the opposing team with her high Strength easily capable of pushing them aside. Her high Shooting stat also makes her a reliable scorer without having to rely on fancy shooting strikes.

The best team for Rosalina is one that supports her offensive nature. Peach and Luigi have high Passing and Speed stats that will help Rosalina in the offensive. Bowser high Strength and Scoring making him a great defender and can even attempt to score goals from afar.

How to Play Rosalina in Mario Strikers: Battle League

The best way to play Rosalina in Mario Strikers: Battle League is to place her purely in an offensive role. She doesn’t have as high Passing stat as others but her high Strength and Scoring allows her to bruise through opposing teams. Rosalina also has a decent Technique stat and can make curve shots without problems.

Rosalina really excels at being your primary scorer. Due to her low Passing and Speed, she can’t really be relied on as decent support. You’re going to need a good team composition to cover for her shortcomings, we recommend taking Peach and Luigi along.

Rosalina has very strong Shooting and Strength stats making her good as a primary scorer. While she doesn’t have great Speed, it isn’t as important for breaking through enemy team’s formation with brute force. Rosalina is very beginner friendly and can be a menace for enemy teams with the right build. We recommend going with a build that increases her Shooting and Strength rather than having to balance her stats out.

You would have to get a good team composition for Rosalina as she does need support for her low Speed and Passing stats. Despite her high Strength, you shouldn’t place her for defense due to her low Speed. Instead get Luigi to take care of item and orb collection for her if you want access to her Hyper Strikes.

We hope you learned how to create the best Rosalina build in Mario Strikers: Battle League using our guide. Don’t go just yet, because we have more on Mario Strikers.

Check out this Youtube video from EnigMind showing the Rosalina animations from Mario Strikers: Battle League.