This old archnemesis of Mario makes for a stalwart defense. Learn the best Gear and team composition for Donkey Kong in Mario Strikers: Battle League. 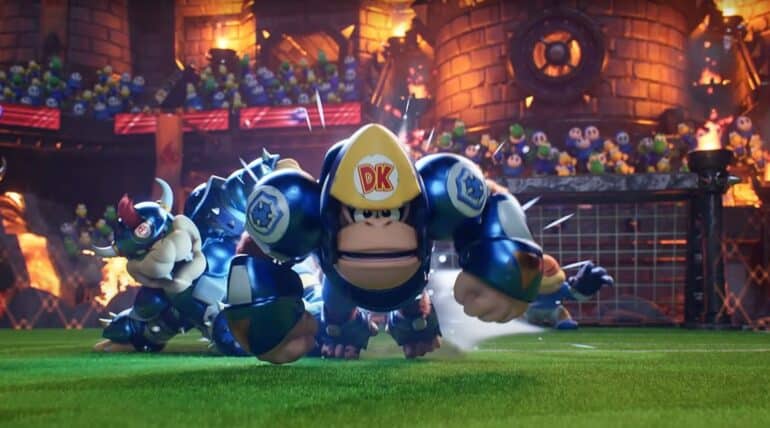 Donkey Kong has a high Strength and Passing stat making him a great defending-support player for his team. This build emphasizes on his strengths and gives you a Donkey Kong that will be difficult to tackle down and can pass the ball to his teammates from the other side of the center.

Players should take care as this build can be countered by speedy offenders. With Donkey Kong’s low Speed stat, he’ll have some difficulty catching up to faster players. However that shouldn’t matter as he can brute force his way against any trying to advance with his high Strength stat.

This team composition for Donkey Kong is best suited for passing the ball around. Players will never be in a position where they’re unable to rely on their teammates as each member has a high Passing stat. Yoshi, Peach, and Luigi all have potential as great scorers which keeps the opposing team guessing on who you’re going to score a goal with.

Players should keep Yoshi and Peach on the offensive while Luigi provides support by collecting items around the field. Peach has one of the best Hyper Strikes which makes for an easier time scoring goals. Donkey Kong is great for this team as a defensive player since he’s high Passing stat allows him to keep up with his team.

How to Play Donkey Kong in Mario Strikers: Battle League

Donkey Kong is best played as a defensive-support character as he doesn’t have much Speed but has a high Strength and Passing stats. He works incredibly well for putting a stop to pushes from the opposing team but he can be outplayed if he’s dealing with fast offenders.

Due to Donkey Kong’s low Speed stat, he should have teammates that can help him make up for his shortcomings. Luigi and Waluigi are great teammates options to pair him up with. Players should prioritize keeping Donkey Kong in the defensive against advancing enemy players.

Donkey Kong has a high Strength and Passing stat making him great for team coordination. However his Speed starts out rather mediocre and has to rely on his team to make up for his shortcomings. Players who play their cards right will find Donkey Kong an excellent defensive-support character.

We hope you learned how to create the best Donkey Kong build in Mario Strikers: Battle League using our guide. Don’t go just yet, because we have more on Mario Strikers.