This loyal servant of the Mushroom Kingdom knows how to play support. Learn the best Gear and team composition for Toad in Mario Strikers: Battle League. 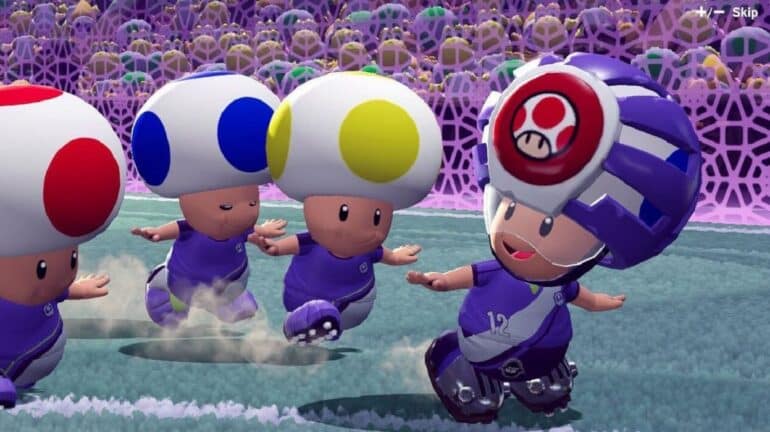 Toad is one of the best support players in Mario Strikers: Battle League with his high Passing and Speed. He’s easily able to collect Hyper Strike items for teammates and pass the ball around enemy defenses. Toad can be a key player in any team composition that wants to outplay and outmaneuver the enemy team.

This build maximizes Toad’s Speed and Passing stats to allow him to provide as much support to his team. Toad will be able to quickly steal the ball away from the enemy players and pass it unto your scorer.

Toad should act as a support for this team composition. Rosalina should be the primary scorer as she has high Strength and Passing stats allowing her to bruise through enemy formations. With Toad’s high Passing stat, players will have no trouble handing the ball to her anytime Rosalina needs it. Peach has one of the best Hyper Strikes in the game, and Toad’s high Speed stat allows for item collection faster to support her.

How to Play Toad in Mario Strikers: Battle League

Toad is best played as a support character with his high Speed and Passing stats. This doesn’t mean that Toad can’t score goals, but there are other characters with better stats for Shooting. Prioritize using Toad for item collection as Hyper Strikes are one of the best ways to score goals and Toad’s high Speed stat is perfect for grabbing items before the enemy team does.

Toad can fill in the role of an offensive-support player, but we recommend prioritizing him for support. Let Toad’s teammates fill the role of scorers instead and use Toad to collect items around the field and pass the ball to teammates whenever an opening presents itself.

Toad has high Speed and Passing stats even without Gear. He has decent a Shooting stat which means you can reliably use Toad for scoring goals whenever there’s an opening. He doesn’t have that much Strength so beware of enemies trying to tackle him.

The Gear build for Toad we recommended above is designed for letting Toad slip past defenses, collect items, and pass the ball easily. Players should make sure to pair Toad with a team that makes use of his speedy build.

We hope you learned how to create the best Toad build in Mario Strikers: Battle League using our guide. Don’t go just yet, because we have more on Mario Strikers.

Check out this Youtube video from NintendU for every Hyper Strike in Mario Strikers: Battle League including Toad’s.