Don't let Luigi play second banana in Mario Strikers: Battle League. Here is the best build you can go for him. 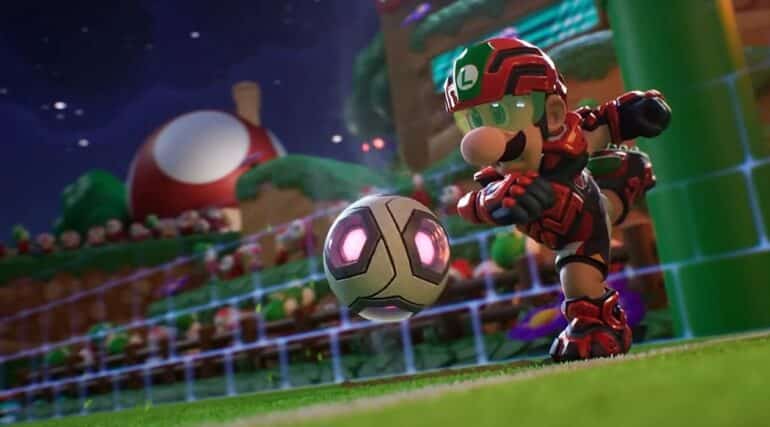 Luigi already has high Technique and Passing stats making him great as an offensive-support player. The gear we listed make him excel in what he’s good at. Luigi will have superior accuracy and his ability to nail tricky curveball shots becomes a lot easier.

You’ll be able to pass the ball around thanks to Luigi’s high Passing stat. This makes him a good choice for a supporting role and it’s one of the most important positions in Mario Strikers: Battle League.

Luigi isn’t a jack-of-all-trades type of character and does have poor viability for defensive strategies. He needs a great team composition that compliments his playstyle. Rosalina is one of the best offensive players around and has great technique like Luigi and Yoshi has a great ability to pass the ball around.

This team has pretty good offensive potential and can pass the ball between characters easily. Bowser is great for defense due to his large body and can easily put a stop to opposing players coming nearby.

How to Play Luigi in Mario Strikers: Battle League

The best way to play Luigi is by putting him in a supporting role. Make Mario or Rosalina the main offense for scoring goals. This doesn’t mean that Luigi can’t score when he needs to as his high Technique gives him great precision and make him excel at curve shots.

Luigi can comfortably fill many positions. Whether you decide to have him play offensively, support, or even defense are all viable. However we suggest letting Luigi play a supporting role as there are many other characters in Mario Strikers: Battle League that can fulfill defensive and offensive roles better.

Luigi has great Technique from the start, but his Shooting is at the lowest. It can be difficult to rely on Luigi to score a goal without first having to collect orbs and items in the field for his Hyper Strike. You can potentially mitigate this by equipping him with the right gear.

We would advise prioritizing increasing his Technique and Passing instead. Let Luigi’s teammates cover his shortcomings. This will prevent him from being stale and take advantage of his specialization.

We hope you learned how to create the best Luigi build in Mario Strikers: Battle League using our guide. Don’t go just yet, because we have more on Mario Strikers.