Have the best team composition in Mario Strikers Battle League. 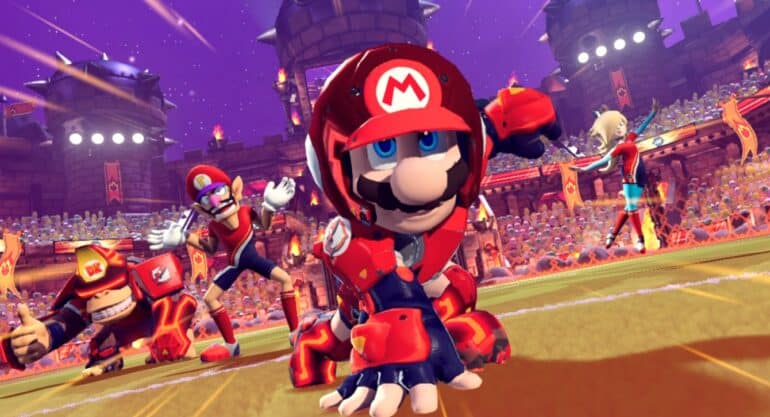 What Are The Mario Strikers Battle League Best Team Compositions?

This speed-focused composition is one of the Mario Strikers Battle League best teams. They function as a great counter against teams who are physical-focused and normally aren’t as quick. Speed-based teams should prioritize item collection in a match as their unmatched speed allows them to quickly pick up items before the enemy team does.

Mario works incredibly well as your primary scorer in this speed-based team, he’s fast and can get very close to the enemy goal quickly. Peach is just as fast and her Hyper Strike is one of the easiest ways to score in the game. Use Toad to pass the ball to Mario or Peach whenever needed. Waluigi is one of the best defensive characters as he’s both high speed and his long arms allow for a better range of defense.

A strength-focused team isn’t the fastest but they can dominate any opposing team with brute force. It has incredible defensive and offensive potential if you know how to position yourself and not rush in.

Rosalina is one of the best offensive scorer in Mario Strikers Battle League with her fast curved shots being hard to defend against. Wario can come as a close second if you need another scorer and Rosalina isn’t open. Use Toad to pass the ball to either of them as his high speed helps compensate the fact that this team can be slow. Bowser is the best line of defense for this team and can attempt making long ranged shots from afar.

Yoshi, Peach, and Luigi all have high stats when it comes to passing. All three also have high potential as scorers, making the enemy team always on their toes trying to figure out who you’re going to try to score with. Donkey Kong has a large body that makes him perfect for defense and can put a stop to any trying to get close.

Hyper Strikes are techniques that make it easy to score a goal. This Mario Strikers Battle League team composition is suited for collecting Hyper Strike orbs and items around the field making it easy to execute as many Hyper Strikes as possible.

Peach should be your main offensive as she has arguably the best Hyper Strike in the game that’s easy to fill up. Rosalina and Luigi have high speeds that can help collect Hyper Strike orbs around the field. Luigi has great stats for passing the ball around and Rosalina can also score pretty easily even without a Hyper Strike. Waluigi is a great defender due to his speed allowing him to collect items and long arms for defending.

A balanced team can cover all your basis. However this team composition doesn’t particularly excel in anything. You can adapt to any strategy you need on the fly.

Rosalina has always been an excellent scorer with technique allowing for precision shooting. Peach has one of the best Hyper Strikes and is a great passer. Luigi has balanced stats compared making him great for any kind of play. Waluigi is fast, allowing you to collect items to fill up for Hyper Strikes, and his long arms give him a good reach for defense.

The best team for beginners would be Rosalina, Wario, Toad, and Waluigi which is a beginner friendly team composition. Have Rosalina as your main scorer with both Wario and Toad acting as support midfield. Waluigi is always great for defense and item collection with his high speed and long arms.

This team will help you catch on to the game’s mechanics fast enough while giving you a strong fighting chance.