This princess of the Mushroom Kingdom is one of the best offensive support players in Mario Strikers: Battle League. Learn all the best Gear and Team Compositions for her. 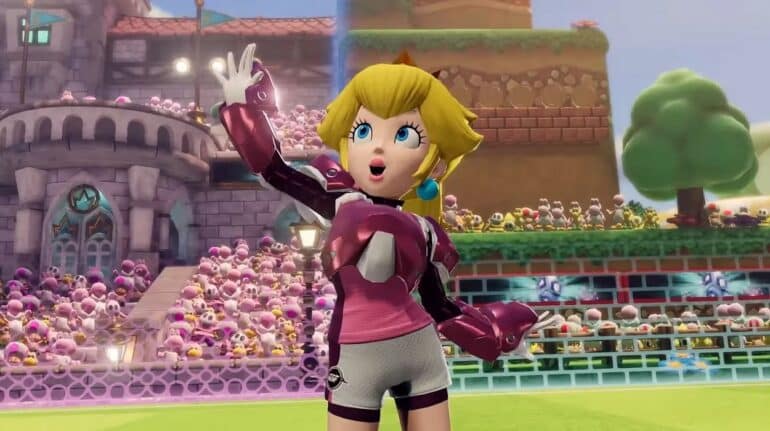 Peach is one of the fastest players in the game and this build compliments her speed. She also has one of the best Hyper Strikes in the game and with her high Technique stat it becomes much easier to execute. Her high Passing stat means she’ll have no trouble coordinating with her teammates to confuse opponents and get past defenses.

This team composition prioritizes being able to pass the ball around with all players having high to decent Passing stats. Peach and Rosalina will be your primary scorers as both have high Technique and Speed allowing them to get past defenses easily. Toad should be your support functioning as a player to pass the ball between the two. Waluigi is a great defender as he’s fast, which is great for item collection, and his long arms allow for better defense.

How to Play Peach in Mario Strikers: Battle League

The best way to play Peach in Mario Strikers: Battle League is by putting her in an offensive role. Her high Passing, Technique, and Speed stats are excellent in letting her get past defenses. She’ll be able to make curve shots and collect items and orbs around the field before members from the opposing team can get to them.

Peach can comfortably fill the role of an offensive support. Her high Passing stat makes it easier to coordinate with her teammates which is always helpful in confusing the opposing team. Peach isn’t very reliable as a defensive character due to her low Strength so it’s best to leave that to her teammates.

Peach already has high Technique and Speed even without Gear. This is a good indicator for how to use her when playing. Due to her low Shooting stat, Peach isn’t as reliable on scoring goals without using Technique as someone like Rosalina so collecting Hyper Strike orbs and items should be a priority.

Instead of using Gear that make up for Peach’s low stats, we instead recommend emphasizing what she’s good at. The best Peach build in Mario Strikers should be increasing her Technique and Speed as a priority. Let Peach specialize in being offensive-support instead.

We hope you learned how to create the best Peach build in Mario Strikers: Battle League using our guide. Don’t go just yet, because we have more on Mario Strikers.

Check out this Youtube video from Peach Toadstool showing all the animations from Princess Peach in Mario Strikers: Battle League.