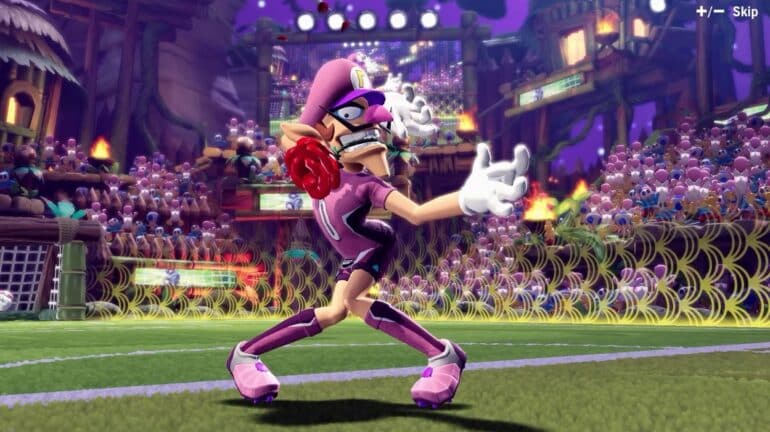 This Waluigi build prioritizes his potential to be a great defender. With a high Speed and Strength, Waluigi can prevent any enemy team from making a goal. He’ll also be great for item collection since his high Speed stat allows him to get to items in the field before anyone else does.

Waluigi works best with this team composition. Both Peach and Luigi have amazing Hyper Strikes and are among the best offensive scorers in Mario Strikers: Battle League. With Waluigi’s speed, players will easily be able to acquire Strike Orbs before the enemy team does allowing for maximum use of Hyper Strikes.

Peach, Yoshi, and Luigi are perfect for team coordination as they’ll be able to keep the ball moving by passing it between themselves. You’ll have a great defensive player in Waluigi with three players that can reliably score goals.

How to Play Waluigi in Mario Strikers: Battle League

The best way to play Waluigi in Mario Strikers: Battle League is by placing him in a defensive position. His high Strength and Speed means that he can stop any attackers while collecting items around the field. Waluigi is one of the best defensive-support players in the game.

Due to Waluigi having low Shooting stat, he’s not really reliable as a scorer. He’s best for supporting his team by either defending or item collection. While you can balance his stats out with the right gear, players are recommended to instead build on his specialty and let his team compensate for his shortcomings.

Waluigi has high Strength and Speed stats even without Gear. However his Shooting and Passing are mediocre. Waluigi is great for defensive-support due to his inherent stats and with the Gear we recommended above, you’ll be able to make the best defender in the game.

We hope you learned how to create the best Luigi build in Mario Strikers: Battle League using our guide. Don’t go just yet, because we have more on Mario Strikers.

Check out this Youtube video from S.Mario. UG showing all the Waluigi animations in Mario Strikers: Battle League.