A guide on how to defeat Gore Magala in Monster Hunter Rise: Sunbreak. 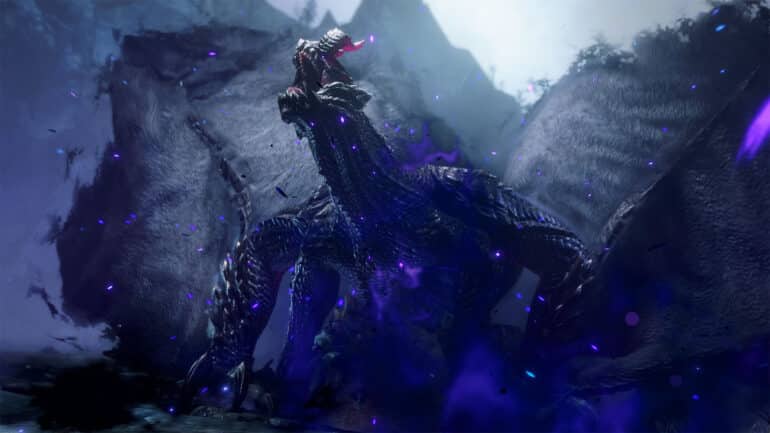 Gore Magala is one of the returning monsters in Monster Hunter Rise: Sunbreak, and along with it also comes the return of another ailment known as the Frenzy virus, and its adult form, Shagaru Magala. This mysterious monster’s return is upping the challenge as not only will the hunters have to deal with Gore Magala itself, but they also have another ailment to worry about aside from the spreading affliction.

In this guide, we will talk about Gore Magala and share some tips on how to make the hunt for it more manageable.

Gore Magala is a mysterious monster that still retains its ??? tag to this day. Its entire body is pitch black in color, accented only by the purple glow of its skin that shows in between the gaps of its scales. Despite being a monster possessing more than four limbs, it is not classified as an Elder Dragon, although its adult form Shagaru Magala is classified as one.

Gore Magala’s head looks similar to the Xenomorphs from the Aliens franchise and that it also does not possess a pair of eyes. In lie of its sight, it has these horn-like feelers or antenna that fold flush along its head in its normal state, and flare upwards when Gore Magala is enraged. Gore Magala also scatter its pollen-like scales which its uses to sense its prey’s heat in conjunction with its feelers.

These pollen scales are also the vector of what is known as the Frenzy virus. Any monster or hunter that gets fully infected by it will have lowered health recovery on top of a lowered defense. If a hunter successfully fights off the infection, they will gain a temporary boost in their attack affinity, as well as a temporary immunity to the Frenzy virus.

Since Gore Magala has no eyes, Flash Bombs will have no effect on it, so use traps to incapacitate it instead. Be very cautious about fighting a Gore Magala and a Malzeno at the same time since you do not want to deal with bleeding and frenzy all at once.

The Gore Magala has several moves and most of its attacks can inflict the Frenzy ailment. Listed below are the most notable moves in its move set.

How to Beat Gore Magala in Monster Hunter Rise Sunbreak

In its normal state, Gore Magala will keep its wingarms folded on its shoulder unless it is flying. Damage done to its head in this state will hit its head alone and will not affect its antenna much. Since its wings are covering most of its body, it is best to concentrate all attacks towards its head.

When Gore Magala enters its Frenzy state, it will start using its wingarms as additional pair of legs and it will also use them to perform heavy attacks, such as the Wing Slam. Its wings will also be flared up most of the time, exposing its side and legs. It will also raise its antenna up high, allowing hunters to be able to inflict damage on it easily.

Some of its attacks will be upgraded with more Frenzy and will hit harder than usual. It is also going to be more agile than before, and perform more attacks in a shorter interval. To take it out of its Frenzy state as soon as possible, its antenna have to be broken off

The Gore Armor Set can be crafted with the following:

The Gore Magala Layered Armor Set can be crafted with the following:

Check out this video by Boss Fight Database showing a hunt against a Gore Magala: