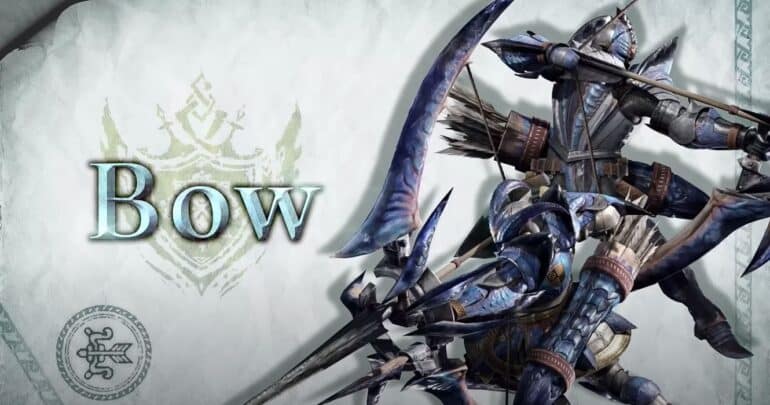 Our Monster Hunter Rise Sunbreak best bow build can be made early into the expansion. Master Rank sets can be challenging to get, so we chose one that’s easy to grind for and flexible enough to accommodate Bow hunters. You can make adjustments and improve this armor to your liking if you want to adapt your own build.

You’ll want to pick Herald’s Battlebow + as your weapon of choice. This bow can carry you to both Master Rank 1 and 2. It has an attack power of 310 for each hit and you can equip slots which maximizes its potential. Equip Spread Level 3 x2 and Rapid Level 3 x2 to deal even more damage for special ammo types.

The Velociprey Set we’ve chosen is pretty easy to get for a Master Rank armor. Since Velociprey are smaller monsters, you’ll be able to get the necessary ingredients to craft this set in less than 30 minutes. Fully upgraded Velociprey armor can carry you pretty far into the Sunbreak expansion.

This armor also has a lot of room for adding decorations so you can customize and add whatever modifications to suit our build. The only part of the armor that isn’t part of the set is the Mighty Bow Feather which gives you added DPS because of its Bow Charge Plus skill which allows you to build up more power.

For the Talisman, we recommend the Weakness Exploit Level 3 as being a Bow hunter will let you hit the monsters weak points with ease.

The best decorations and skills to choose add more damage to our bow. The Bow Charge Plus skill increases the max bow charge allowing for higher damages. This is important for our build which is why we recommended the Mighty Bow Feather as it’s the only equipment in the game that will let you use this skill.

Pair your charged attacks with the Weakness Exploit and you’ll be dealing a lot of damage. Critical Eye and Critical Boost also pair very well as the former raises your affinity and the latter gives a boost to critical hits.

Constitution will reduce stamina consumption for those dodges. You’ll be dodging a lot as a Bow hunter since you have no other defensive options. This is especially important in solo hunts where you don’t have anyone to tank damage.

If you’re having trouble getting the armor we recommended above, then you could check out this Youtube video from Arekkz Gaming showing an easy Master Rank armor for beginners to acquire.