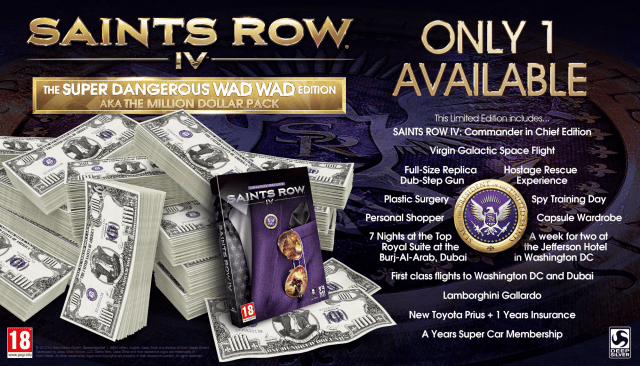 Saints Row has become one of the unexpected games that made its return recently and with the new game going on a boom literally, some fans are revisiting some of the old lineups of the game and comparing them online. Among the lineups, Saints Row IV was the one game that felt unexpected to me.

In Saints Row IV, players will take on the role of the US president. As the president, not only will you lead humanity to the task of protecting the citizens but fight against alien scum again literally. I know it sounds weird but it’s a Saint Rows game and wackiness and nonstop action comedy are part of the plot twist especially when you suddenly make a murderous alien war emperor mad and he blew up the earth at the beginning of the game and hilariously abduct you and your allies naked.

When Volition announced the game back in 2013, it announced special editions to it, and among the editions that were announced was the $1,000,000 Saints Row IV Super Dangerous Wad Wad Edition also known as the Million Dollar Pack. This pack had not only the game with it but also, some of the craziest things that you will ever hear in a game edition. Crazy things such as Hostage Rescue Experience, Go to Outer Space, A week for two in the Jefferson Hotel in Washington DC, and Plastic Surgery. Let’s be real here, this package is fake and Volition probably intended to do this type of promotion as a means of pranking and hyping up the fans of the Saints Row series.

It is unknown whether or not someone bought this ridiculous package set but all I know is that this bundle can’t be found anymore including online stores such as Amazon, eBay, and even Gamestop. Even if someone did manage to buy the game, I highly doubt they will get their money’s worth, especially with the current situation in the US economy.

This Million Dollar package set not only shows how wacky and crazy Volition is selling their Saints Row series but how they can manage to appeal to the fans and even break the 4th wall just to show the game is worth playing and that fans should play all of the series from the 1st to the latest.

The new Saints Row is out now for the major consoles. Read our Saints Row – Review to see what we think about the game. Also, check out our other Saints Row guides and articles below: