Top skills to use in Saints Row 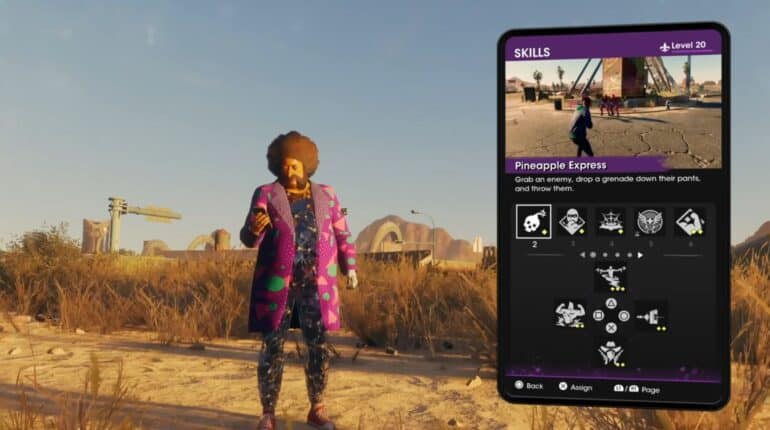 Saints Row has become one of the talked about games of 2022 since its release. With many features and unexpected gimmicks found in this game such as unlockable weapons, vehicles, and perks. Among the features that are unlockable in the game, there is one that stood amazingly effective throughout the course of the game and that is SKILLS.

Skills stated in our previous article, are additional attacks or power-ups that players can utilize to get an advantage in combat. These abilities are fairly effective and have no remorse for any enemies, and can be considered a big game changer throughout the whole gameplay of Saints Row. As such, we of Sirus Gaming, have listed down the top 10 best skills to use in Saints Row.

Considered to be my favorite among the skills, no one loves getting thrown into a crowd with grenades stuck on one’s butt and exploding in a crowd. This skill is highly effective, especially as a finisher, and has saved me countless times from danger. It presents the potential to do more damage as an AOE and can make things more interesting for players to do.

Buffing up is a must-need skill required in Saints Row, especially in front of certain and the skill, Tough Mother, can help in saving one’s life. Technically, this skill allows players to gain a temporary health boost to absorb damage from enemies and negate staggers. Useful when players are nearing death and are a lifesaver with no problem whatsoever. I highly recommend equipping this skill especially if you are playing on extreme difficulty.

Simplicity is the best method to reach the goal. That is actually true especially when you want to add grenades to your arsenal. I was very skeptical when I noticed at the beginning of the game, that there were no grenades to be added to your inventory. Later on, as I reached level 7, I unlocked this skill and things turn in for the good. Throwing explosives and dealing an area-wide type of damage to enemy hordes is fun and effective and I am glad to use these skills.

Out of nowhere, hitting enemies with an inferno attack is something no one expected to do in Saints Row. Out of fun, I always use this skill to show off how overpowering I am and how wacky Saints Row can be especially to those who are new to the game. This skill may not be effective for large groups but it is still a highly effective skill that I would recommend.

In our previous article about perks, there are abilities that can be useful especially in healing oneself. One of the perks, Big Finish, helps players gain more health when doing a takedown and when combined with the skill, Transfusion, gaining health in tricky situations is no problem at all in Saints Row.

Setting up traps is really fun to do in Saints Row and no matter what happens, enemies will either explode or get stuck in a tricky situation. The same could be said for the skill, Impulse Trap where players can throw an anti-gravity device that lifts enemies into the air, making them vulnerable to a quick shot. Easy and fun to do and is a must-need skill to survive.

Never feel shy in calling for backup to support you in Saints Row. That is something that will always be remembered since you are managing a criminal empire. This skill is recommended to save yourself from unwanted danger and no matter what happens, facing danger alone isn’t enough to survive.

Adding a little flavor of Overwatch in Saints Row is really unexpected, especially for me. The skill, Quick Draw, is similar to the skill of McCree who is now named Cassidy where players will pull out a powerful revolver and then press the trigger to quickly gun down up to four enemies. As overpowering as it is, players can put the fear of John Wick into them using this ability.

Looking stylish and perfect is the key in Devil May Cry. The same could be said for Saints Row as they take a page from DMC, using the skill D4th Blossom where players spin around and fire bullets in every direction. Ranging from rifles, dual pistols and even, shotguns, the choices are limitless that I high recommend this skill.

Precision and accuracy are powerful weapons that make Saints Row a challenging. Combine those with the skill Overscope, you will be unstoppable. In a fun aspect, players will gain a powerful focus ability and when they do a headshot, enemy heads will explode like what they see in Sniper Elite.

Check out this video by RetroKrystal showing all the skills in Saints Row: