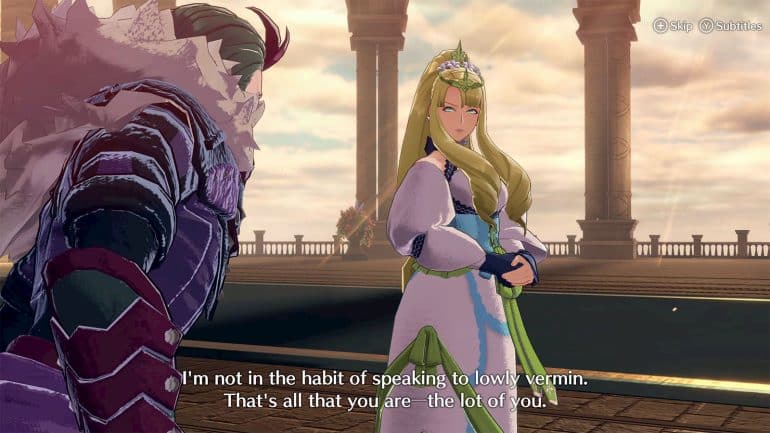 Retaking the Castle is the fifth chapter of Fire Emblem Engage. Enemy forces led by Lady Zephia have invaded the castle of Firene with the goal of taking the emblem ring entrusted to the kingdom. Knowing that Céline was given the ring before she fled the castle, they are now taking Queen Ève as hostage knowing that the royal children will come to her rescue.

Read on as we go through the events of Fire Emblem Engage Chapter 5: Retaking the Castle while we share more details about the story and characters, as well as some tips to help in the battles.

As the party heads back to the castle of Firene, they notice that the castle is awfully quiet. Fearing for the safety of the Queen, they immediately make their way into the castle.

You’re then introduced to Lady Zephia, the commander of the enemy troops who have made their way into the castle and scare Queen Ève to give up the emblem ring that their kingdom holds. But knowing now that Princess Céline took the ring away from the kingdom, they change their plans and make the Queen their captive in order to lure the Princess back to them.

The party arrives just in time, and Lady Zephia leaves the castle as she lets her troops deal with the rest.

If you haven’t done it yet, it’s recommended to have Alfred wear Sigurd’s Ring to take advantage of its passives which allows bonus movement and damage. You’ll need Alfred to easily chase down a thief that will be going after the kingdom’s coffers. Make sure that everyone else has their equipment optimized with ample Vulneraries in their inventories.

Some enemy troops and their captain have hid inside the castle chamber and one of the ways to get to them is to break down the main doors. Although the doors can be done early on in the fight (on lower difficulties), it’s better to clear out the enemies outside first, then wait for Alfred’s party to reach the treasure room before barging in to be able to perform a pincer attack. Doing otherwise might cause your party to get overwhelmed by the enemy forces instead.

On the west side of the castle are a bunch of enemy guards and one thief that will be beelining towards the treasure chests. Have about half of your units led by Alfred chase down the thief; it’s recommended to have one staff user in this party like Framme so that they can immediately make use of one of the weapons that you’ll get from the chests.

There will be a long and narrow corridor leading to the treasure room that will be blocked off by enemies. When this happens, have Sigurd perform his Override attack which allows him to go through the enemies while dealing significant damage to them. At this point, your remaining units for this party will be left behind, so just have them concentrate on dealing with the rest of the enemies as Alfred can handle the thief on his own.

Once you defeat the thief, you can check on the chests and get the Armorslayer sword and the Obstruct staff which you can equip on your units right away. If ever the thief got to one or both chests before you, defeating the thief will still allow you to get the weapons after the match.

Once you reach the treasure room, there is a patch of wall that you can break down to gain access to the castle chamber. Once you’ve gathered your second party by the wall, you can then have them break it down while letting the units by the main chamber door go in as well. This should allow you to put pressure on the enemies on both sides and make the rest of the fight easier.

After the fight, you can spend some time talking to the other characters and the rest of the people in the castle. You’ll be rewarded with the following items, including the weapons you obtain from the chest:

Unlocking the Clothier and Blacksmith

After the battle, the Clothier and Blacksmith will also talk to you as they want to open up shop in Somniel. You’ll then be able to purchase different kinds of outfits for your characters at the clothier that they could wear while in Somniel, while the blacksmith offers its services to upgrade and power up your weapons.

Check out this video by Excelblem showing the events of Chapter 5: Retaking the Castle: